So this week was our school's spring break, and guess where i went? duh it's in the title of this blog, but still: DISNEY WORLD ! The whole thing was kind of ridiculously magical and fantastic. (did i mention magical?) 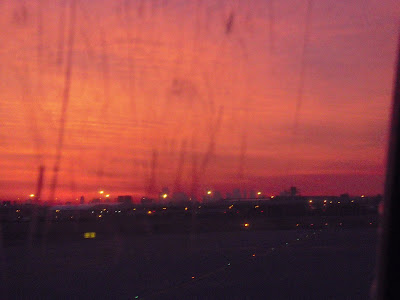 Right before take off!! Stupid scratch marks on the window messed up the picture :( 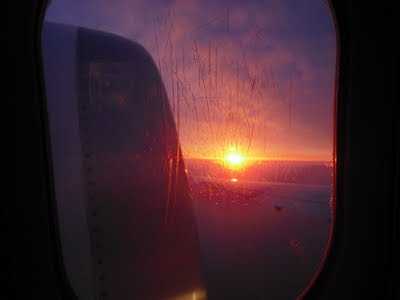 The sunrise from 2904545 feet above sea level nbd. (i hate those scratch marks)
On the first day I woke up at 2:30 am so i could be at the school by 3. Then we took buses to the airport so we could catch our early flight.  By 10 am we were walking around in hollywood studios!  My friends made me go on rockin' rollercoaster, which i thought was a kiddie coaster, but i was COMPLETELY WRONG. 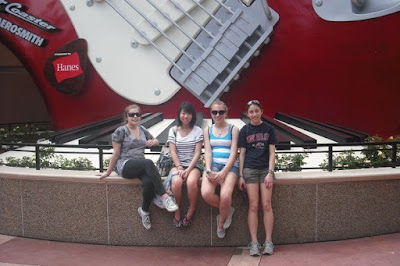 Here's the calm-before-the-ride pic
When we were in line for it i was okay, but near the end of the line, you get to see the people get shot off at speeds of 20958 mph and that's when i knew i'd made a huge mistake.  But being the brave and stalwart person i am, i went on the ride anyway, and it was actually fun in a terrifying sort of way. The first day was kind of a blur cuz we were so ridiculously tired, and as soon as we got back to the room at 9 that night, we all passed out.

Second day we went to epcot!  Probably one of my favorite places we went to.  Seeing all the different countries was really cool, and in China i met MULAN.  She was so legit and in character that i decided to overlook the fact that she was white (or atleast that's what we thought). 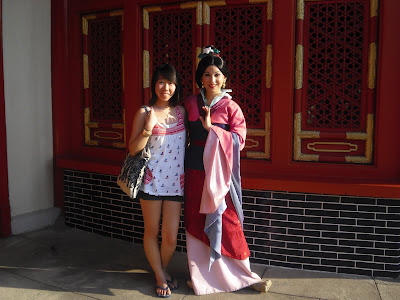 Look it's us together in the motherland !
We ended up eating dinner at this fancy place in Morocco which was kind of the best decision i've ever made haha.  I split shish kabobs, a salad, and beef rolls with a friend, and it was deliissshhh.  My other two friends got lamb couscous, and they ate it to the bone....then they wrapped up their giant bone and took it with them as a souvenir hahaha.
Lol also they have this hilarious thing called the Great American Adventure in Epcot.  Why don't they just call it America?  We finished the night by watching these amazing fireworks, and then went back to the hotel.  After taking showers, three of us went to the tub and soaked our feet.  Swear to god if it weren't for our bi-nightly soaks, my feet would've fallen off after the ridiculous amounts of walking we did.

Third day was magic kingdom ! I went on space mountain twice, and splash mountain once (: see the transition from absolutely terrified of rollercoasters, to actually kind of liking them? After lunch we reported to the meeting place for marching band kids and changed into our thick black uniforms. It was over 90 degrees nbd.  Luckily we made it along the whole parade route with no one passing out, which has happened alot in the past.  After finally changing out of our uniforms, we walked around, only to be denied a chance to meet pooh and tigger.  "No more people in line" ....are you kidding me?? I did not fly to florida just to get denied my tigger and pooh. Sadly there was nothing we could do about it, so we suppressed our disappointment by going on the pooh ride (we ride in honeypots!) and eating ice cream.  Then we made our way to main street where we watched the electrical parade! After that there was this cool show where they lit up the castle different colors and showed pictures on it.  And after that was the wishes fireworks show~! 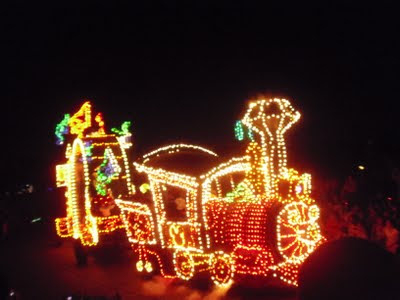 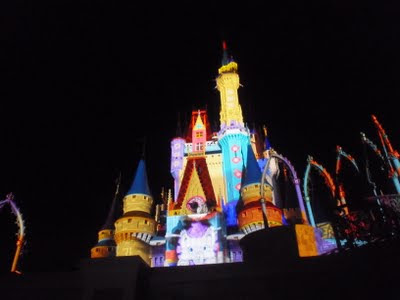 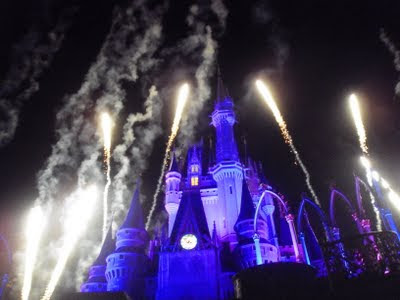 After the fireworks, we went back to the hotel at like 11 and immediately passed out haha.

The fourth day was universal studios! Harry Potter World was pretty amazing.  Sarah and I were waiting outside of the Three Broomsticks for two of our friends to get off a ride we were too chicken to go on.  While we were sitting there, matt (sarah's kind of friend but she hates him and apparently he hates her? idk.) walked by and told us to go inside and help his group eat because they ordered way too much.  Apparently they had some guy-drama where four of them wanted to split a giant feast option for $50 but one guy backed out at the last minute, and then another guy didn't want to step in and be the 4th person.  When matt went outside it was only because he was storming away from the table in anger hahaha.  Anyway, we walked in to find a table piled with food. And semi successfully managed to help eat.  I cleared the potatoes for them and was instantly stuffed.  They were pretty good, and the fact that i got a free lunch made them all the more better (: 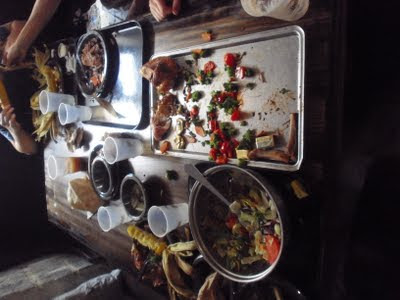 remnants :)
After lunch we walked around and got completely soaked on this one raft ride, and my pants never dried that day haha.  When we ate dinner at the hard rock cafe, my pants left wet marks on the chair.  Speaking of hard rock, i had a bacon burger there and it was kind of super delicious. While we were eating, this one kid comes over and just walks straight into the window hahaha.  He actually thought it was the door lol 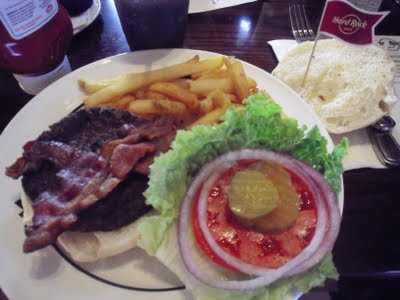 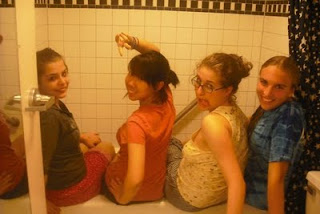 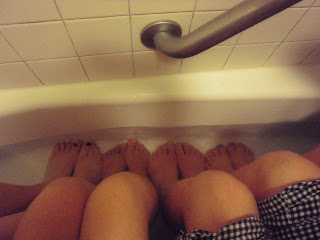 When we got home from that, my room decided to have girl-bonding night! This time, four of us soaked our feet together. Then afterward we played a deep (and semi-awkward) round of truth or dare.  It was really nice though since it was a good way for us to open up to each other.  Some of the questions were really probing, but i was pleasantly surprised that everyone answered truthfully.  We did this exercise where we told the other four our favorite traits of theirs. It was really nice (: Abby kept randomly falling asleep/singing along with her music out of no where.  When her ipod fell off the bed and disconnected with her earphones we all silently cheered haha because she didn't notice, and we weren't about to tell her about it.  Dare wise, we were limited since we weren't allowed out of the room (the chaperones taped the door, so they'll know if we sneak out).  But we made a dare list, for the next day.  My friend had to ask her crush to go on a ride with her (which she totally rocked. If you're reading this, i'm proud of you!!). Another girl has to go a whole day without makeup which she is valiantly undertaking on monday.   My dare was to have a 90 sec conversation with this guy. The next day at animal kingdom i didn't go up to him because it was too embarrassing, but when we got to the airport for our flight back, i ended up asking him to play cards with us.  We were partners for kemps (: and it was really fun~! So i kind of super over-achieved with my dare, nbd.  There ended up being a pretty long delay with our flight, so we played cards for a few hours (no complaints here). 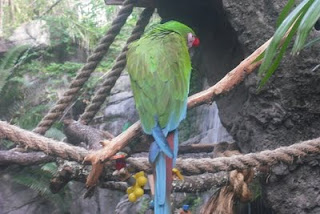 But back-tracking a little, the fifth day was animal kingdom, and we saw the coolest animals there!  As soon as we walked into the park, a ranger/employee person greeted us holding a glass cage.  Inside was an african bullfrog or something like that, and it was hilarious since it was so ridiculously fat hahaha, and it kind of did a weird waddle walk.  Then we moved onto these large open areas with animals.  At this one place there were these giant gorgeous macaws.  We noticed that there wasn't any sort of net that kept them in though, and wondered why they didn't just fly away.  Sarah (a friend) told me that it was because they cut their feathers so that they couldn't fly.  Even though we knew, we thought we'd mess with the ranger-guy who was nearby.  Our conversation went something like this:

Me: Excuse me, why don't they just fly away?
Ranger-guy: We clip their primary flight feathers.
Mara: But that's awfully sad!
Ranger-guy: Well, it's just like getting a haircut!
Me: Technically isn't it like getting a footcut since it disables them?
Mara: Yeah, i don't know about you, but my hair doesn't help me fly.

....and after that we just walked away because he looked pretty pissed off.  I bet he has to deal with that kind of thing on a daily basis, poor guy. 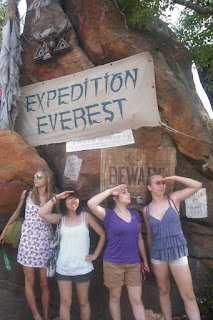 Anyway, we journeyed to Asia where we went on the Expedition Everest rollercoaster twice (we went on it again later too). Seriously, this trip actually completely turned around my opinion of rollercoasters. They used to be terrifying and a definite no-no, but now they're terrifying in a good way :) 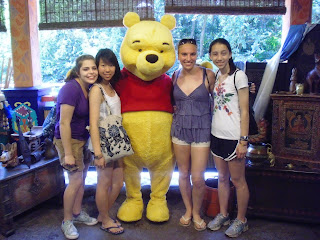 For lunch, our whole school went to the rainforest cafe! It was sooo cool inside, but the swinging monkey over our table got annoying after a little bit. Seriously, it was going crazy.  One of my friends started feeling pretty sick during/after lunch.  She was actually shaking like crazy and we thought she was dehydrated so she drank like a billion cups of water (and then we made a billion trips to the bathroom after that). On the brightside, we managed to meet pooh, tigger, and eeyore! So take that you stupid-heads from magic kingdom. >:(  animal kingdom's where it's at. 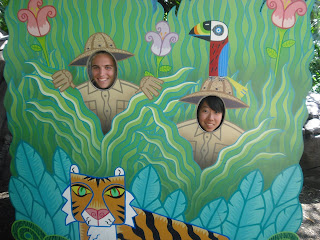 After walking around and doing some shopping, it was time to leave :( oooh but before we left i made my friends go do that face-in-the-hole thing. Haha i've always wanted to do one of those, it was really fun~ After that we got a little lost looking for the exit, and when courtney said "i think we need to turn around" Mara just gave up and sat down hahaha, but eventually we found the exit (turns out we went in the complete wrong direction)
So we got on the buses and watched disney pass us by on the way to the airport :'(
Along the way, sarah and i realized that we had to pee reeaaallly bad cuz we drank alot of water but forgot to go to the bathroom before leaving.  So after forever, we finally reached the airport and got checked in.  Then we sprinted for the bathrooms. (we actually sprinted up the escalators but the bathrooms were downstairs so we had to sprint back down lol)
After that we learned that there was going to be a pretty big delay for the plane, and the whole cards thing happened n_n
We also found out that mara (the super drinking/peeing one) was actually sick with a fever of 102 :(  Then she got quarantined on the plane which totally sucked. The plane ride as a whole stunk.  Near the end there was mega-turbulence and a couple people near me puked. TOO BAD THERE WEREN'T PUKE BAGS.....  But in reality, people managed to get some sort of bag just in time, so it was all good.
We finally made it to the airport, and landed in the middle of a storm, which made me instantly miss the warm sunshine of florida :(  After over an hour of baggage claiming, we finally stumbled onto the buses at 1 am, tired as hell.  The funny part is that we were supposed to be back at the school by 9ish but we didn't until 2.
Well, that was our trip in a nutshell (: just thought i'd blog about it since it's something i want to remember~! 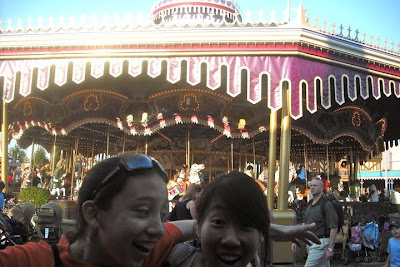