I know you wanted me to update my blog, and here i am updating my blog.  You basically already know what's going on with my life, so all i have to say is thanks (: Seriously, your words were like magic.

I finally took the PSATs (thank god) and i don't think i did as well as i would've liked, but oh well.
We had a football game which was average. Then a performance that was average. Then we packed up and went to the competition. and guess what? that was average too. We got back home at around 7:30 and that's when things stopped feeling average.

I had been on auto-pilot all day and i think i was finally snapping back to reality.  oh, and now for a momentary digression to clarify my story.

So near the end of summer i had a problem/fight/thing with one of my really close friends, and we kind of stopped being friends.  I would say more, buuuut no. :D

Okay here's the actual story: I wanted to make things right again so i asked him to go to the diner with our other friend.  He said yes (which kind of surprised me) and i felt like it was going to be awkward but worth it. But what does he do? He brings along two other guys without even asking me or my other friend.  Two guys that i'm hardly friends with. Don't get me wrong, i think they're funny and nice and all, it's just...wrong to do something like that.  I don't understand why he would do something so rude.  Was he scared of having to talk to me?  I don't know.  On the outside i tried to look like i was having fun and i talked and laughed and stuff, but on the inside i was so confused.  I guess i just assumed he also wanted to be friends again.  The thing is, even though he doesn't talk to me, i feel like he's listening whenever i say something, even if loads of other people are talking.  It's like he gets me.  But at the same time he totally doesn't.  Bringing those people to the diner in the first place is an example right there.  I don't know anymore, but i wish things could just go back to normal.

Okay obviously there is a trend in my blogs.  They're all filled with my worries and anger and "negative energy".  Why can't i just write happy stuff?  Maybe i just don't have enough to say on those subjects. ACTUALLY. Something that did make me happy is that my art teacher ended up really liking my bass drum drawing !  He didn't have anything bad to say about it, and told me it was beautiful three times. Ego boost? i think yes.

Recently i've been watching the japanese drama "One Litre of Tears".  It's based on a true story of a girl who is diagnosed with an incurable disease but is able to live her life to the fullest, despite many obstacles.  In a way, she's my hero.  She made me realize that i need to cherish my friends and everything that i have.  I'm really lucky to be living the life i have but i still selfishly complain about all of these things that are going so "wrong" in my life.  So then i feel ashamed, ultimately adding more to my piles of worry. :\

This day has been way too long.  I need to go sleep and just forget about everything.

I had a good weekend n_n

Today i woke up around 12 and spent the whole day eating yummy food and working on my ap art homework (which i just finished :D) I actually went through all of my chinese, japanese, and korean music while drawing xD.  To make things more interesting on here, i'll add a picture: 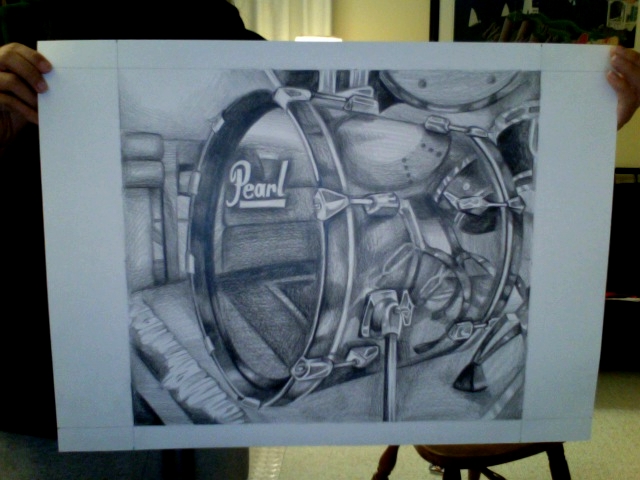 Tada ! The assignment was to draw something reflective, and i picked my set <3

Anyway, yesterday we had a marching band competition and got back at around midnight.  It was fun n_n
oh, and that really annoying kid from my section calls me his new best friend now, which is awesome. not really. D: I feel like i was going to write a lot more about yesterday, but it's 12:30 and i can't think of anything. I'm also writing like a second grader.

Sooo nothing really new going on.  Still stuck at home and still being overwhelmed by school work and all that.

BUT, I decided that I should try posting more sanguine (SAT word!) entries mostly because Sonya (not me) has inspired me to. So here we go.

Today I woke up to the sound of my little sister's playdate with her new friend.  They were running around and shaking the whole house. It was adorable (: Then I had to get out of bed, which totally sucked, especially when my room is freezing.

Took a shower, did homework, ate food, started this blog, and left for the football game.

Okay I just realized i'm not actually typing anything interesting nor happy sounding, which kind of defeats the purpose of this blog.

I also realized that trying to capitalize all my i's is extremely annoying. So i'm going to stop.

So at the football game today, two of the five bass drummers couldn't come because of soccer, so my friend filled in for one of them.  She seemed like she was having an awful time though, and got extremely self conscious whenever she messed up. :\  I told her it didn't matter at all though because how could we expect her to know the music? Anyway, turned out she was mostly upset because her boyfriend (senior) hadn't been spending that much time with her lately.  (She complained that they hadn't hung out for a week, but HEY. I haven't been able to do anything for like a MONTH)  Soon that'll change since PSATs are next weekend!! After that, freedom.  I can almost taste it (:

Okay screw being positive.  Yesterday was kind of a really shitty emotional day for me.  I got yelled at by my parents (what's new?) and of course it was about SATs, school, college (even though i'm a junior!) and other random shit.  Don't they understand that yelling at me is not going to make me do better?  All of it just makes me think too much and draw conclusions about how shitty i am at life.  I hate thinking about the future sometimes because i have no idea what it is that i want.  Duh i want to get into a good college and have fun and be successful, but in what field? Art? But then how would i be able to support myself?  I've been told stories by my parents a long time ago of what they dreamed to be.  My dad wanted to be a physicist, but ended up working an office job that paid alot more.  I don't want to make a choice like that and just throw my dreams away, but i also don't want to end up jobless on the streets. Okay, i'm exaggerating, i probably won't end up on the streets, i'll just live with my parents, which is waaaaay cooler -__-.  But you get the point. I just don't know.  This is where i'd start complaining about how badly i'm doing in school too, but i'm actually sick of complaining now...so i won't!  Saves you a lot of pointless reading huh?

So i guess i failed in my mission to write something happy and optimistic. OH. actually, i've got a marching band competition tomorrow! Yay !! But our band director told us to expect to come in last since the bands that are going to be there are gonna be super mega amazing.  On the bright side we're gonna get to watch these bands! Okay i need to stop before i write more negative things. I promise that next time my blog is going to be completely whine-free and the title isn't going to be ridiculously misleading!
Posted by Sonya at 11:52 PM 1 comment: