So I finally finished blogging about Japan! Now moving on to my post-Japan life, hopefully I can sum it all up in one post. Get ready for a lot of text and pictures, these two months have been mad busy.

Three days after I got home from Japan, I set off for Cambridge, MA for MIT's CPW (campus preview weekend) It was four days long (thurs-sun) and at first I was really nervous and socially awkward. By the end, I had met some pretty amazing people, and I look forward to seeing them in a few months :) I was really scared of MIT at first, and maybe I still am, but when I visited, I realized that even though the coursework is rumored to be mad intense, everyone there is really chill and there's a lot of community and support amongst the student body. Soon after I got back from CPW, it was time to raise money for Relay for Life! There was some can shaking and surprisingly the people going to the local Diner were a lot more generous than the church go-ers.  Actually, I don't know if it was surprising or not, but it was sure interesting. We also had a big bake sale at the high school, and even peddled some off to the elementary school kids.  The actual Relay for Life was amazing and really emotional; especially when we watched the slideshow of names and saw the track light up during the Luminaria ceremony. The night was surreal in a way.  The atmosphere was weird, I can't really describe it, or maybe it was from the lack of sleep, who knows.  But the whole time I kept telling people we were in a dream; I hope it didn't get on their nerves too much.  I'm glad I was able to go to Relay and witness something I've never seen before, thank you team captain of Awesome. Yes, our relay team's name was "Awesome".  How embarrassing is that?

Also in these past few months, I've been to two art shows.  One was the Congressional Show in which one of my classmates won! Her work got sent to D.C to be displayed.  It was a silkscreen of two gumball-machines (she's a crazy good photographer).  The second show was at a local framing company, and it featured my work since I had been chosen to receive one of their scholarships! It was kind of really awesome to see my work professionally framed and lit on a gallery wall. Their sandwiches were also really good. Thanks Emma and Mara for coming :) It meant a lot! 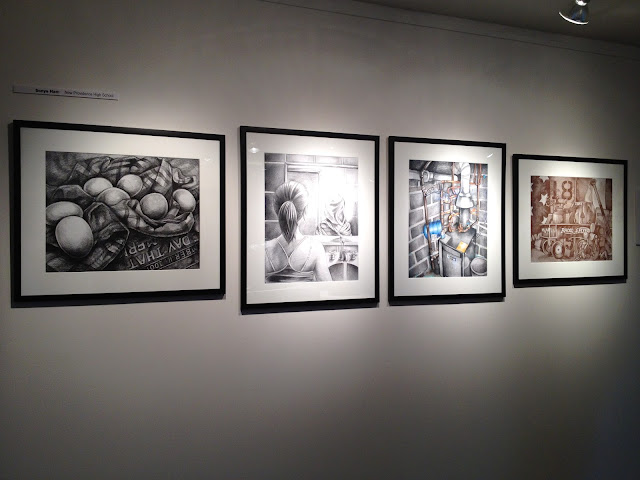 Shalom also performed twice. The first was the final round of Battle of the Bands which we didn't win, but I thought we played well :) I felt kind of nostalgic when it was over even though I knew we'd be playing again. Our second show was a chill one in the backyard of these kids who are also in a local band. Our set was about ten songs long and I was sweating by the end of it, mostly because it was so goddamn humid (and our guitars would not stay in tune for more than a few minutes). The yard was lit up with Christmas lights and filled with neighbors who dropped by to watch. Dan said he was going to hold a backyard show later in the summer and I hope he does because I definitely want to play more before summer is over.

I also went to my first real concert! Mara took me to see Death Cab for Cutie at the Beacon Theatre (which may I add, is beautiful).  First we hailed a cab (oho how relevant) and went to this cute little resteraunt called Lime Leaf to grab some dinner.  I got some delicious red curry and almost puked from trying to finish it all (I failed.) Afterwards we waddled over to the theater, bought shirts (ahh first concert shirt!) and found our seats. The opening act was kind of weird, not gonna lie.  They were mad loud, but I still almost fell asleep somehow.  Then Death Cab came on, and I could not tear my eyes away from the stage.  Holy jesus they were amazing; Their studio songs are really chill, but their live sound is so intense, and his voice is godly.  How is it possible that he sounds even better live? Mind-blowing. They were accompanied by the Magikmagik Orchestra who I immediately fell in love with as well. Thank you so much for taking me Mara!
May also meant AP tests; I took Japanese, Literature, and Art this year. Thank god my college doesn't accept chemistry or statistics cuz those would've been extremely painful to study for. Also I was too lazy to study for psychology, so I dropped it lol. Lit was a shitfest, and so was Japanese even though I actually studied pretty hard for it. Hmm maybe languages can't be crammed :/

June meant prom! There was some bullshit trying to find a date but it all ended up okay in the end. We took a shitload of pictures, hopped in the car, and made a grand entrance to the fancy country club full of fancy food. Prom was pretty fun, and it's kind of nice to be girly and get all dressed up, but whhhyy do we wear long dresses and heels and then dance all night? Can someone explain that to me? It was pouring when it was over, and we clickety-clacked our way to the car shielding ourselves with free XL advertising t-shirts the DJ gave us.  The next day we set off for prom weekend! The plan was to camp overnight saturday and sunday at a national park, and hit the beach during the day. The first day was chill, we relaxed on the beach, and got to the park in time to pitch tents, grill burgers and dogs, and (attempt to) start a fire.  By some miracle, the fire actually caught (2 hours later?) and we sat around roasting marshmallows and singing songs while thomas played guitar. Sitting in front of that fire with everyone there made me feel really warm. Soon it was time to retreat to the tent where we told awful pointless stories while making fun of Brian for having to pee so much.  (We think he may actually have some sort of health problem. Once every 15 minutes is not normal.) He used the same bush every time. Soon, the act became known as "punishing the bush".  It probably died from continually absorbing his pee for two days.
The next morning's breakfast was pretty intense. Again we used the grill for bacon, french toast, and omelets. We spent the day at the beach again, got bullied by the waves, and eventually retreated when the clouds started rolling in.  After some dinner and walking around the boardwalk, we returned to camp to find everything flooded and soaked.  Our pillows and sleeping bags were just sitting there absorbing dirty water. We salvaged what we could and made for the cars.  Sleeping in a car might be one of the more uncomfortable places I've ever slept. Especially when you can't stretch out because there are four more people in the car with you. Regardless, it was still fun, and we were warm (also, Brian's peeing problem escalated) The next day as we started packing up, it started to pour again. By the time the tents were taken down, the chairs folded, and the luggage organized, we were all completely soaked through. Apparently beach umbrellas are not even close to being designed for rain.  It just passes right through the mesh material and hits you in the face. During the drive back we blasted glorious warm air and stopped for some BK lounge. So maybe prom weekend didn't turn out perfect and sunny, but it definitely is an unforgettable memory.