Going Back and Moving Forward

This past week has been really relaxing. I spent a lot of time bumming around with kaykay, and she was almost kind of tolerable!  I even tagged along with her and my mom one evening on a walk to the park. My memory's already a little fuzzy, but I remember that day was really sunny and beautiful.  It was a nice break from all the storms that've been hitting our area recently. Anyway, we stayed at the park for quite some time while kaykay ran around with a few kids and my mom talked to another mom.  I flipped open to a fresh page in my sketchbook and settled down on a bench. Actually that bench was the most uncomfortable thing ever, so "settled down" probably isn't the right choice of words.  But speaking of drawing, I've also been doing a lot of it this past week. I've also been having day dreams of starting a graphic novel again haha.  I haven't felt so refreshed in a long time; I feel like I'm a kid again, not a high school graduate! Sitting at my desk and getting headaches from breathing in the marker fumes has never felt better! Maybe it's because we are going to college soon, but I've been feeling pretty nostalgic lately.  It's not that I don't want to go, it's just that I'm scared to make the transition.  It's weird.  I know that I'm not actually saying goodbye to anyone for good, but this whole thing's got me feeling uneasy. Haha this blog post is a mess! I intended to blog about what I did this week and then post some kickass pictures, but somehow I've started rambling.

Anyway, this week I've done some running with nicole at night, and once in the morning (lol never again please.) I've also been cooking a lot, which is pretty uncharacteristic of me. I dunno what's gotten into me, but I had so much random energy.  So instead of sitting on my ass like usual, I actually helped out and accomplished things (but I still did allooott of ass-sitting and manga-reading (kimi ni todoke and shaman king!)) I'm a little too proud of my culinary creations (since it's such a rare occasion), so I'll be posting pictures of all of my masterpieces! Enjoy :)

So besides for re-awakening my inner art-god from slumber and becoming a master-chef, I've been hanging out with my friends and watching the London 2012 Summer Olympics! Shalom even reconvened one night. Victor was too sick to come though so I played drums for a little which was really fun even though my drumming was pretty sad. My parents are also making me start my thank you cards already.  It was a pain in the ass to start at first, but I bought the cutest cards and once I started writing them, I actually enjoyed it! I didn't just thank them for the gifts, but I also tried to include more personal stuff, which lead me to get pretty emotional and again, nostalgic.  And this was only our family friends! I'll be starting my friends' cards soon though, and hopefully I don't go overboard haha. Also....I got my very own laptop! A 13" Macbook Pro.  It's beautiful :') and definitely worth being broke for. I'm actually using it right now as I blog from the comfort of my bed. Speaking of the comfort of my bed...goodnight. 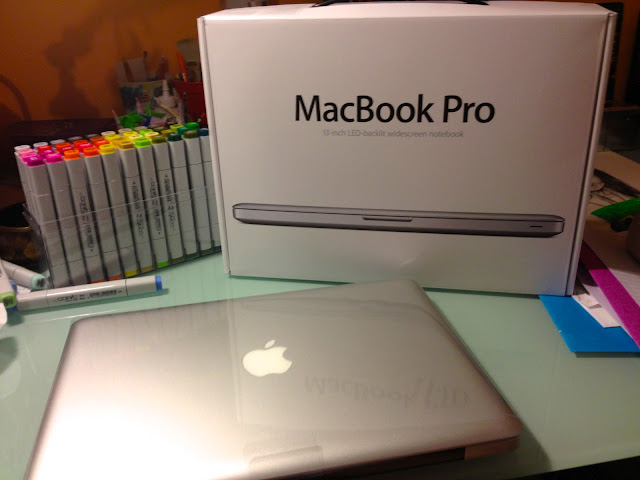