Home Away from Home

It's October! Time passes by so quickly. I can barely believe that I've already been here for over a month! Living away from home is really weird, but at the same time it's really liberating.  I'm also learning to be more organized, kind of.  Anyway, I've been mad busy and haven't had time to update this thing, so here we go, my whole first month of college!

Orientation seems like forever ago, so I barely recall any details, but it was a flurry of meeting new people and struggling to remember names.  There were a billion events going on, so we were pretty busy except for when we were too lazy to go places. We did go to a weird carnival party at east campus where there were rides and contraptions made out of wood, and a big soap water pit where semi-clothed people wrestled as a girl showered them with glitter. I also went to a few other parties with good music and good dancing.  There were some guys who asked me to grind...awkward.  I feel like I've been pretty sheltered so far in life haha.  Anyway, we also went to the New England Aquarium which was pretty damn cool, except it's so depressing looking at those fish stuck in such little spaces. Soon, rush and recruitment started and me and my roommate thought it'd be a good idea to go paintballing. Mistake. So painful. We also went to the first day of recruitment which was pretty boring so we didn't go back.

After 10 days of orientation/rush, classes started!  This semester I'm taking bio, chem, multi-var calc, and japanese 3. Man, coursework here is so intense compared to high school! We have problem sets for each class due weekly and the learning pace in Japanese is mad fast, I have some trouble keeping up with what the hell is going on.  Also our teachers only speak in Japanese, and we aren't allowed to speak in English either haha. But this is probably going to really help my japanese so it's all good :) Regarding school, this past week was basically midterm week.  I had my first test in calc, bio, and chem and did way better than I expected. I've made some really good friends since I've gotten here, and they're really nice about helping me when I have no idea what the hell is going on (they're all super smart).  I'm also on really good terms with my roommate; she's from Washington (the state) and is a really good dancer.  She's also pretty random, and we have a lot of fun goofing off together and acting like 5 year olds. Attractive, I know. We also hang out with our neighbors a lot. One is a pathological liar from Oregon, and the other is a faux-korean pop star (he's taiwanese) from NYC who can breakdance. I've met a lot of students from taiwan actually, and they're all really nice except for this one guy who looks and dresses like a k-pop star and enjoys acting like a douchebag.  I think he's secretly nice though, but we'll see about that. I've also made my first korean friend! She's from St. Luis, Missouri and is pretty awesome.  I love it when her parents call her on the phone and we get to hear her speak in Korean. I've met so many people holy crap. There's a girl from Arizona, a whole slew of people from California, and I have classmates who're from Korea, China, Mexico, Spain, and Malaysia. College rocks.

Since classes have started, we've also been on two cruises, one fancy boring one, and one fancy dancing one (it was basically a boat full of hot asian people. Me and Minerva (roommate) didn't really dress up since it was rainy and shitty outside, so we ended up sticking out from the sea of tight dresses, but oh well. Atleast we were comfortable lol. We've also been to a few frat parties, one of which was a foam party. It was pretty amusing dancing around in the bubbles, but so messy since we were covered in soap-y water. I've been to Boston to watch a weird pseudo live movie that my advisor directed.  It's kind of like a play, but with screens that show what's going on from his point of view as he films around the stage.  We got there halfway through so we had no idea what was going on, but there were a lot of naked people walking around on stage.
I also went to the Prudential center, newbery street, china town, and Boston commons (almost got attacked by a squirrel) with Matt and Thomas when he came up to visit for a weekend! There was also a free concert featuring....Gavin DeGraw and Train! Oh man they are so good in concert.  I went to career fair here, and got 20 free shirts and a shit-ton of other stuff. Impressive, huh? Also I joined the IM badminton team for my dorm, and it's really fun and intense lol. I tried club volleyball too, but it was so painful that I never went back after the first practice. I'm also part of an art club that a bunch of people are trying to start, but we haven't really done much yet. I also tried out for some dance groups, but didn't get in :'( I'll probably try out next semester though! In the rest of my free-time I mostly just bum around with my friends and play a lot of tetris and SET.  It's kind of sad, but oh-so addicting. The other day I watched "You Are the Apple of my Eye", a taiwanese romance film. It was hilarious, but left me with a bittersweet feeling. I also couldn't help myself and cried a little even though I'm pretty sure it's not supposed to be a sad movie. I've also seen Moonrise Kingdom with my advising group which was a really weird movie that I somehow managed to cry during as well. Speaking of movies, tonight they're playing the Hunger Games in the MPR downstairs! I've seen it before, but I'm looking forward to seeing Peta's dopy face again. Eeep dinner time! Sorry this post was really disjointed and random, I promise to start posting more regularly! 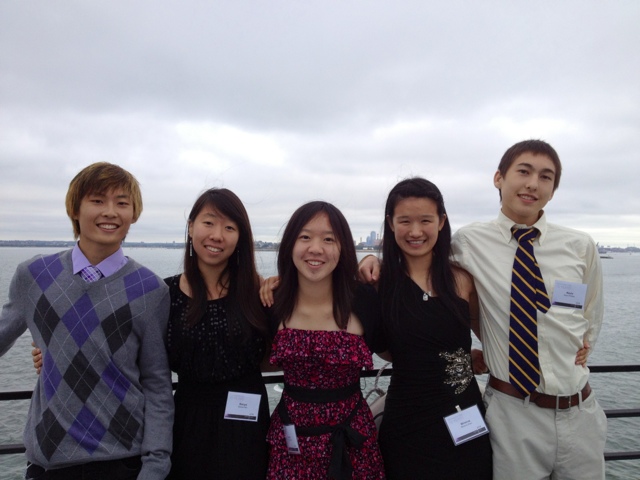