So....about that promise to blog more regularly...sorry.  Skip forward another month, and it's november! Actually, it's already been november for about two weeks.  Anyway, since the last time I've blogged, a lot more has happened! Eunice and I made a short movie for our film-mking seminar which turned out pretty weird, but was a lot of fun to make. We also went on a pretty crazy biking adventure with Randi a few weeks ago.  So we have a list of 101 things to do by graduation, and #87 is to bike the Minutemen Trail.  It starts in Alewife, Cambridge and runs north 11 miles to Bedford. We stupidly started the ride at around 4 pm and by the time we were almost to Bedford, it was already pitch-black outside.  The trail was unlit, so we used our iphone lights to make the rest of the trip there. Once we got there, the plan was to take a bus.....which apparently conveniently did not run on Sundays. When we asked a shop keeper, he told us that our best bet was to bike 8 miles to Arlington and try to catch a bus there. I don't know how, but we managed to make it there by biking practically on the highway.  It was mad scary, and pretty reckless of us :\ anyway, eventually we caught the bus that took us to Harvard and biked the two miles back to MIT.  Never. Again. Atleast we got to cross it off the list, but it took a few days for my butt to recover from that ride.


Oh yeah, speaking of biking, the reason I was able to get my bike in the first place is because my family brought it with them when they came for parent's weekend!! It was really nice to see them, and I had a lot of fun going out to eat some quality chinese food (finally!!!) and walking around harvard square.  We also went to a mini carnival and I took some cute photobooth pics with kaykay :) Before they left, I rode around in our car for a few minutes, and it got me all nostalgic. I miss my squeaky toyota :( Good thing I get to go home in exactly ONE WEEK! I was a little late with the whole booking-a-way-home thing, but managed to find a bus-line that I've never heard of and bought tickets.  Hopefully it's not that sketchy.  I felt kind of adventurous and almost bought tickets for the chinatown bus ...but arriving in chinatown at night is a little too adventurous for me. 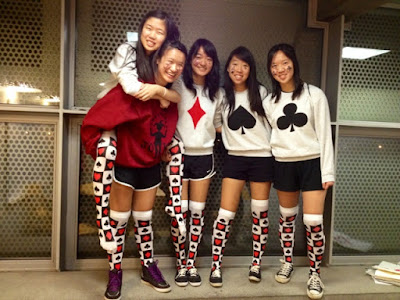 Also this past month was halloween! Me and my friends dress up as playing cards :) We bought the sweatshirts for only $5 a pop and used fabric markers to make them. Finding sweatshirts/shirts in the first place was kind of a challenge, and we walked up and down Mass Ave. for practically 3 hours looking for them. We hurriedly ate dinner and decorated them at top speed.  Then me and Eunice went to our IM badminton game while they tried to dry the sweatshirts with a blow-drier. I didn't play badminton very often back home, and I have no idea why because it's so freaking fun. Maybe that's my inner asian emerging.  Speaking of asians, almost all of my friends are asian minus one or two.  My friends back at home asked me if I'm going to college in Boston or China. They're funny. Anyway, after that we came back, got dressed, and showed up mega-late for spooky skate, which is when they open up the ice rink and you can skate for free.  We waited in line only to find out that they'd run out of our sizes :( Eventually we got our hands on skates and went around once....sad. But strangely fulfilling (it's on the list!). Afterwards we decided to head over to Boston and go to Chan's frat for a bit. It was a black-light party and hey had completely chalked all the walls with glow-chalk.  It was pretty trippy and awesome. Chan got his big to give us some vodka that burned the hell out of my throat, so I barely drank any. By the time we left at 2, he was in the process of getting pretty drunk, ripping his shirt off and dancing around.  The night after that was pumpkin drop! At midnight we were gathered around the Green Building (tallest building in Cambridge), waiting for the first liquid-nitrogen infused pumpkin to fall. They launched around 100 pumpkins, which all exploded upon impact.  It was kind of awesome. 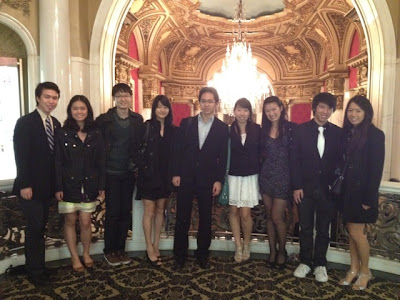 In other news, my friend I-Ling is part of a frat called Alpha Delta Phi, so we usually go with him to a lot of their events.  A few weeks we went to their semi-formal which included dinner and a trip to the Boston Opera House to watch Warhorse. Our dates were late and then we somehow didn't get the right tickets so we only saw the second half of the play.  Not really sure what went on...but the horses were mad realistic and the gun shots were really loud. I think the highlight was eating food, and then the 7 11 slurpee afterwards. This weekend (lol finally caught up to the present) we went to their M-night which stands for martini night. So we got suited up and battled over to the frat house in heels.  The martinis all smelled really good and tasted really bad. I still can't understand why people drink :\ We played a round of pool, in which me and me partner kicked I-Ling's ass. Then went upstairs to check out the casino games.  Some people were really into it and were winning big time, but we just threw around some chips on roulette.  I heard the winner would get an iPad mini, but there was no way that was gonna happen for us. We sat around until a few guys approached us and started making small talk. They were a little pretentious and pissed me off, but my roomie just told me to nod and smile, which worked wonderfully. Eventually she started talking to this guy I-Ling brought over (because they're into the same webcomic) and another guy came over to talk to me.  Unlike the others, this guy was nice and I felt pretty comfortable talking with him.  He showed me a bunch of card tricks (I got tricked by all of them) and we managed to leave the frat house at around 2:30, then journeyed over to CVS to buy red hairspray for Kevin (he lost a bet against me). We couldn't find any, so instead we got funions, tights, and nail polish. Close enough. After we got back we stayed up for no reason until past 6....oh my college sleeping schedule.

On sunday I was going to start homework I think, but managed to not. Next house was having a party, so we went over at around 11.  The music was pretty good, but the light system was insane.  They had a DJ there specifically for lights.  Also it was kind of a nice change to dance without worrying about getting caught in between two couples making out and grinding the hell out of each other. Dorm parties are so different from frat parties haha. Joyce came back to Simmons with us, and we got to talk for a little which was kind of nice since I hadn't really seen her around since orientation.  Mainly because we never go to parties with her even when she calls us. :\ She said she makes an effort to try and go out atleast a few times a week, and said we should go with her. I think i'll take her up on the offer since I feel like sometimes we're mad antisocial. Anyway, yesterday we had off for veteran's day, but we spent a lot of it studying for today's math midterm, yuck. After the midterm, I dragged some people to McDonald's with me to celebrate! I've been planning this for a while actually....man I really missed that place.  Got myself a frappe, and drank it while walking to the Z center in the rain.  I was so cold but it was sooooo worth it.  I also got an 100 on that math midterm, so now I get to cross off #3 on the list: Ace a test! WAAAHH!! Now i'm celebrating by not doing any work.  I'll deal with it all tomorrow night :') Time to go play badminton---!