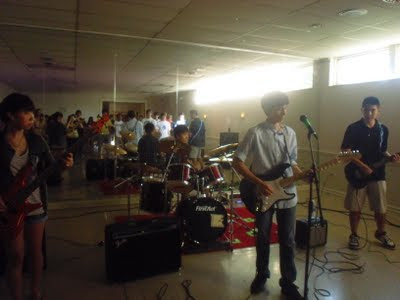 Ahhh !! We actually performed yesterday for the first time !!!! I am so proud of my band :)  (We got second! ...probably cuz we sold the most tickets...but still) The day before our performance, we hardcore practiced for atleast 4 hours, and then yesterday morning we practiced for a few hours too before the show. Holy crap i felt like i was going to puke my guts out right before we went on, i was so nervous !! But after we started playing, the nervousness melted away, and it just felt like any other practice in dan's basement.  My wonderful wonderful friends came to watch/support us, i love you guys !!  Thanks to nicole, we got footage of our performance, and thanks to mara, we have pictures to go with it.  Every time i was feeling a little uneasy, all i had to do was glance over at my screaming friends  adoring fans, and their loudness and enthusiasm made me feel better.   After the performance i was feeling really high, and the band that played after us was ammmazzzingg: [ Station Baby ] Their bassist was crazy good, and crazy.  Their guitar player was awesome, and their drummer was so cool.  Also their singer had a really strong and unique voice.  Pretty sure dan fell in love with their band.  I don't really have that much time to finish this blog since i'm leaving in 15 minutes for architecture camp! Lol.  So i'll finished up quickly.

The last act of the night was Sterling Daze. and they were crazy.  The lead singer kept jumping onto amps and even the bass drum.  Also he didn't wear shoes lol, something me and mara found very amusing.  The best part was when the guitar player kicked over his amp, smashed his guitar on the ground, dove into the drumset, and then laid among the rubble.  It was absolutely ridiculous, every one was gaping at him.  Eventually he just got up and calmly walked away.  I even heard from my friends later that they saw him lift up his shirt, and he had bloody gashes on his back. Ugh.


I promise i'll put up more pics next time ! Seriously gotta go now. Also expect a blog about architecture camp! OH and i forgot to mention it in this post, but on wednesday i went to nyc with ed and albert (camp friends) and it was really fun !  They make fun of me a lot though :(  It makes me cry in dark corners.  If either of you are reading this, i hope you feel guilty.  Hahaha anyway, camp time! Be back in a week !
Posted by Sonya at 4:34 PM