Ha, it's been about a month since we've gotten back from Japan, and I have yet to finish blogging. Okay, I'm gonna power through this. SO. Saturday, April 14th aka exactly a month ago. 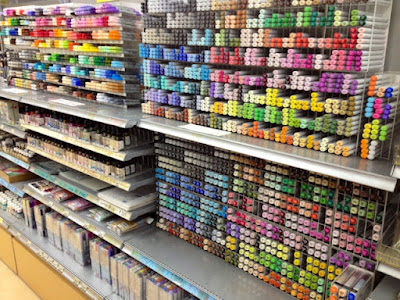 Did not wake up on time. Again I felt pretty guilty, but then I ended up waiting for my host mom to get ready for half an hour after I was ready...which they apologized for, but made me feel a lot better.  Anyway, we set out for a little shopping, our first stop being a book/stationary shop. HOLYMOTHER it was jammed packed with adorable office supplies.  It kind of was a throwback to chinese book stores, but in Japan everything is cuter and neater (and more expensive). Anyway, there was practically a whole isle dedicated to COPIC MARKERS.  Aren't they beautiful? 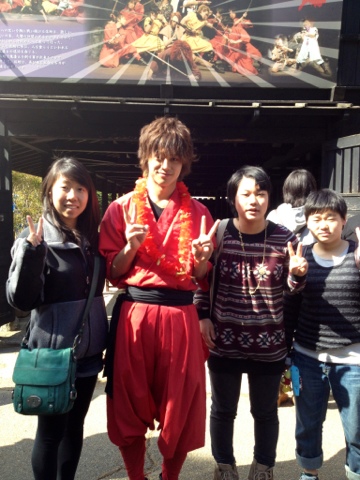 So for the day they decided to take me to a Japanese-style amusement park. It wasn't roller coasters and gut wrenching rides (thank god).  All of the buildings were traditional, and there were good-looking guys strolling around, dressed in costume. Shizuka told me that these guys can be referred to as "ikemen" which according to jisho.org means "cool guy; energetic man; hunk". Very applicable in my opinion. Anyway, the first thing we did was go to a ninja show.  We sat in a dark room with a stage that jutted into the center. The stage was constructed to resemble a mountain setting, and the red ninjas and black ninjas were facing off and doing all kinds of intense athletic shit.  I'm not sure if I followed it exactly, but I think the story line had to do with this boss ninja who ordered his followers to steal the elixir of life, but at the end there's a bunch of betrayal where the boss kills one of the followers for being wounded, and then the other guy kills the boss. But in the end there's a soliloquy and somehow everyone comes back to life and breaks out into the thriller dance. Weird. After the show the ikemen ninja all lined up outside, thanked everyone for coming in a loud voice, and bowed.  Then giggling girls lined up in front of each one in hopes of talking to them and getting a picture taken. This guy started talking to me in Japanese before realizing I couldn't understand anything.  When they told him I was visiting from America he got all excited and kept saying "I want to America, I want to America." Haha I was dying, but managed to tell him (in Japanese) that he should totally come to America. He told us to "ENJOY!" and did this weird shaky shoulders thing (which we all mimicked later).  He reminded me of a really happy dog. 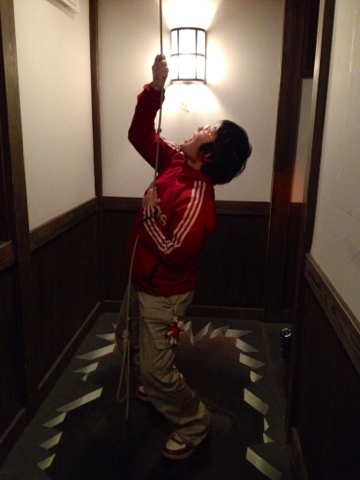 After the show, we went to a ninja house which was really trippy.  They had whole rooms build on a slant so it was impossible to stand up straight.  The gravitational force created a bunch of optical illusions like tennis balls rolling up an incline or ropes suspended at 25 degree angles. It was totally weird. There were also other ones like the ground painted to look like a chasm and steps leading to a wall painted with more steps.  Lol there's my host mother pretending to fall into the hole.  We also played games like blow-darts and traditional arrow shooting (which I completely sucked at by the way).  Then they went to go do the zip-line which I completely wimped out on.  I may've gotten over my fear of heights a long time ago, but flying across a river is a little more than I can handle. We bummed around, ate food, took an excessive amount of pictures, and then set off for her great aunt's house.  We got some delicious snacks (MOOCCHIII) and then abducted her great aunt to go back home with us. For dinner we made some intense takoyaki! AKA octopus balls.  The cooking process is actually pretty awesome.  First we sprinkled crunchy stuff in each hole of the pan.  Then we prepared the batter with eggs, mix, and lettuce. After pouring that in we added bits of ginger, and I had the honor of picking up little chopped up bits of octopus and putting one in each puddle.  Then once it started cooking, we took long metal toothpicks and did a wrist turn for each, which caused it to dislodge and allowed us to rotate the balls so they could cook all the way around.  Not sure if that description was follow-able but I tried my best haha.  Also, the ratio of her ball-turning-rate to mine was about 10:1. Dinner was delicious (especially the seafood salad) and afterwards we just chilled and watched my host mother, grandmother, and great aunt gut a whole colony of fish.  There were literally giant buckets pilled with fish everywhere, and fish blood all over the three different gutting stations.  They told me to stay in the other room haha. Once everything was cleaned up and it was safe to enter the kitchen, we ate some adorable desserts from a local bakery. The last night comprised mostly of sitting around the warm table and talking.  When it got late, I grudgingly set off for my warm futon for the last time :'( 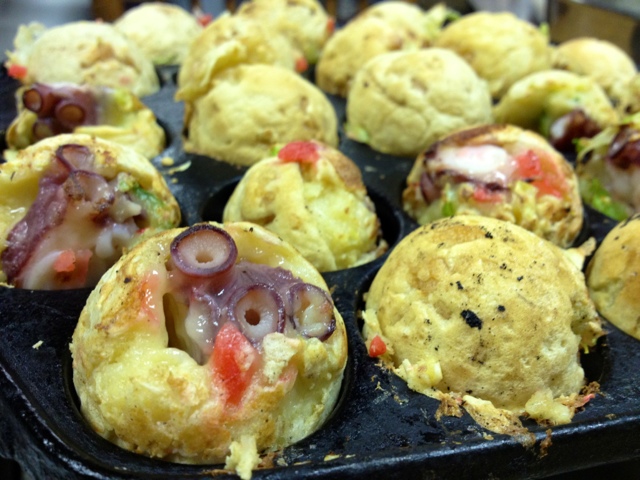 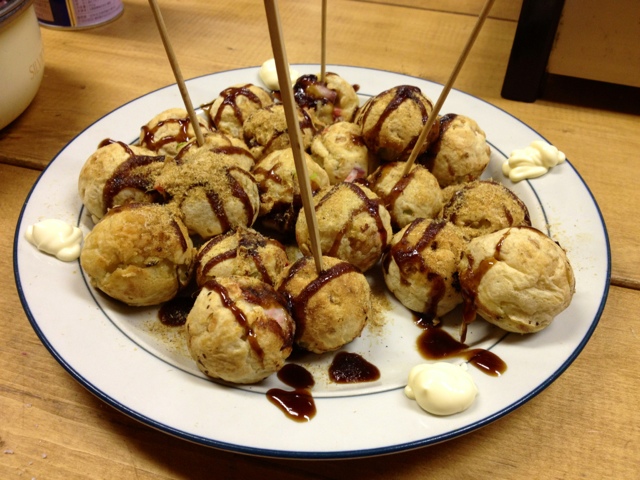 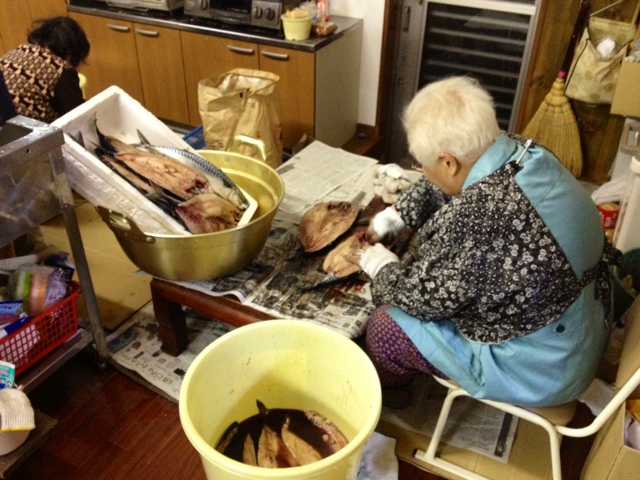 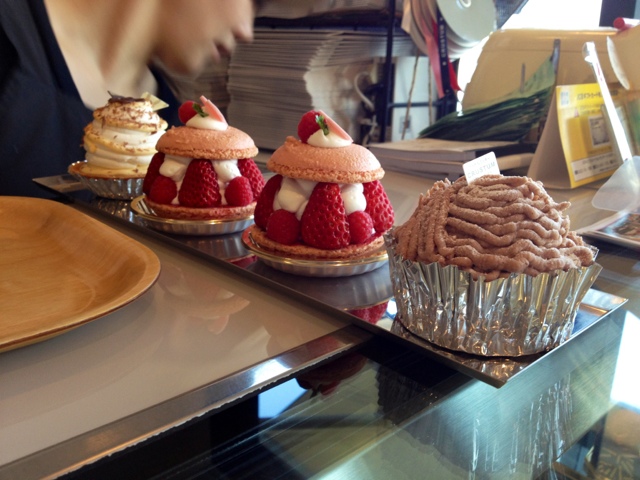 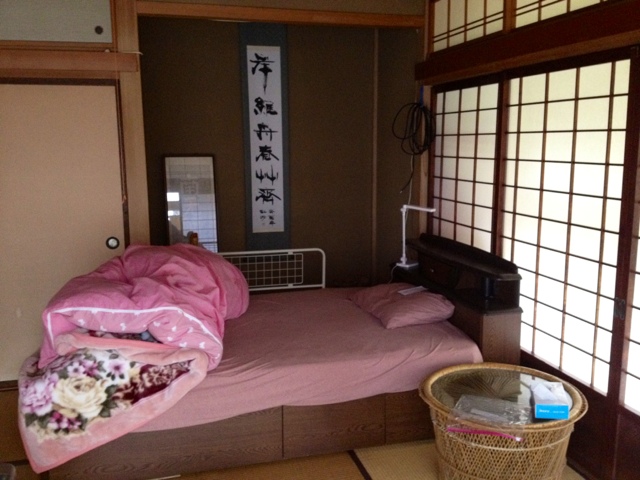