Continuing with the series I call "A Belated Account of Japan".... Friday was a full day of school! I'm ashamed to say that I rolled out of bed late (can't I atleast have the decency to get up on time in a foreign country?) Anyway, we had to give science presentations to the Koshi kids, so as soon as we got there, CC and I practiced our presentations for a little.  We had to present about alternative energy and green architecture.... all in Japanese.  Ha, please, as if I knew what I was saying. Thank you internet resources. Anyway, we presented, and then had a speed talk session, where we got grouped with two Japanese students each and had to talk to them about school, differences between America and Japan, and hobbies. My conversations involved toilets and ear-piercing.  Also some of the guys asked me if I had a boyfriend. I've noticed that that particular subject is a popular ice breaker with the Japanese kids.  After meeting at least ten of them and remembering zero of their names, we moved on to a home ec. class.  We learned how to wrap bento boxes, bottles, and watermelons. Our table was a little awkward since the kids we ended up with barely talked to us, but oh well. Finally it was lunch time, and my girl's mom made us cute little triangle bentos! There were carrots, sausages, onigiri, and these ridiculously delicious rolled eggs.  Yumyum, anyway, after lunch we listened to the Japanese kids present science to us, and had another mingling talk session. 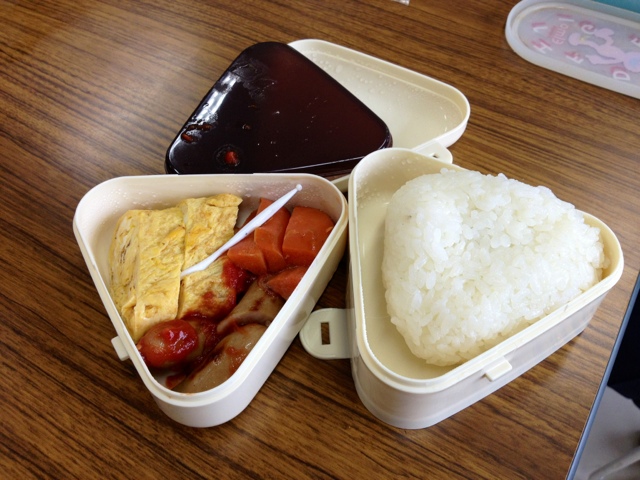 After that we got to go to a 書道 class! It was awesome, and the sensei was such a pro. I learned how to write my name in Japanese and then we all got to write our favorite kanji on a giant communal paper.  I picked "楽" which means fun/enjoy/happiness. After that, the ESL (English as second language) club took us around so we could see all the after school clubs.  We got to watch kendou which was crazy intense.  They shrieked and yelled while zipping across the floor unceasingly hitting each other with their kendou swords. We also got to watch basketball, badminton, volleyball, soccer, rugby, archery, and a band.  Did I mention that Shizuka is captain of the Juudou club? That's a form of Japanese wrestling.  According to her teacher, she can throw a 100 kilogram man over her shoulder...AKA more than 200 pounds, holy crap. Before dinner we met up with Akari (Shizuka's sister) and went with Nicole and Hikaru to take PURIKURA ! It's like photobooth on steroids.  So basically you walk into their arcade-esque room with pumping music filled with booths and plastered with giant pretty people.  It's kind of overwhelming haha.  Anyway, we picked a booth (apparently they're all different??) and took pictures.  Afterwards you can decorate your pictures with a cool touch screen pen, but there's a time-limit.  Holy crap it completely stressed me out! I'm the slowest decorator there ever was.  Aren't these crazy? We're freaking anime characters. 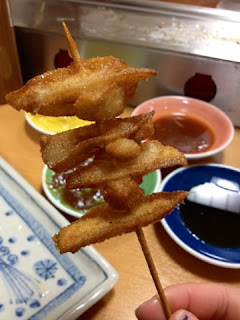 We met up with okaasan for dinner at a yakitori place! I had the best peach juice known to man, and stuffed my face with deliciousness on a stick. I tried everything that came, including fried cartilage, which actually turned out to be pretty good.  It was funny when she tried to explain to me what I was eating by pointing to her joints.  I was like wtf I'm eating elbow ?? But technology came to the rescue and cleared that all up.  Once we went home I tucked myself away under that wonderful, warm table and ate a gigantic apple.  Seriously, the fruit in Japan is amazing!  Everything is beautiful (and really expensive).  Anyway, okaasan came and asked me to draw her.  She had recently written a little piece in a book, and she needed a picture to go along with her biography.  It was totally out of the blue, but I gladly sketched her a picture, and they thanked me by buying me two black copic multiliners (YEEESSSS). We all sat around the table (stuffed our faces with snacks) and talked until it got really late.  Then I stumbled off to my warm futon and passed out. Sound familiar?