It's February, and you know what that means....birthday mania ! I've been way too busy (and a little too lazy) the past week to blog, so here's a giant post to sum up the last 10 days of my life.  First of all, my birthday was on the 3rd! I have officially entered into the magical realm of womanhood.  Which is actually a lot like girlhood, except for the fact that I'm eighteen. Also, my friends joke about how I still look like a 14 year-old, which doesn't really help, but hey.  Anyway, my birthday was a lot of fun! It was way better than the shit birthday I had last year. I decided to host a semi-party at my house, which turned out to be pretty stressful actually, but was fun anyway.  I always forget how much I dislike hosting parties. All the preparation and cleaning and worrying that goes into it just stresses me and my mom out, but we always end up doing it anyway haha.  Anyway, my friends came over, and we made some delicious asian food (dumplings and sushi) and played alot of Scattergories.  Sadly I can't really remember much else, which makes me really wish I had blogged about this sooner, but oh well.  Or maybe Scattergories really was all we did lmao.

Anyway, I got some really thoughtful presents this year!  Emma got me a dog tag with the character "友" on it which means friend.  She remembered how I really wanted a dog tag from like a billion years ago haha.  I'm not sure when I'll wear it, but I don't care cuz I love it :) CC and my mom both got me adorable fossil wallets to fuel my fossil addiction (pun intended. fuel. fossil. ha.).  CC's was a wristlet though, so I can get lots of use out of both of them! She also got me earrings, hot chocolate, and wafers (tradition).  I also got really cool gloves from Nicole that work with my iPhone - how sick is that?  She also baked me a gigantic bag of delicious chocolate chip cookies, yumyum.  And Mara's taking me to see Death Cab for Cutie in april!  Aka my first concert ever!  Eeep so excited! I got this really big book of I.M. Pei's architecture work from my dad, which has amazing pictures of his buildings.  I haven't gotten around to reading it word for word yet, but it's definitely on my to-do list...along with a billion other things I haven't done.  But let's not get off topic. From my Shalomies I got a real bass strap, some bracelets, and two hilarious cards.  Sarah and Gabe made me a giant tiny tower out of foam board and velcro.  It's the greatest thing ever.  So, amazing birthday? I think yes. 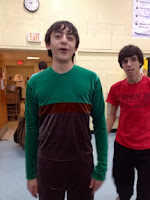 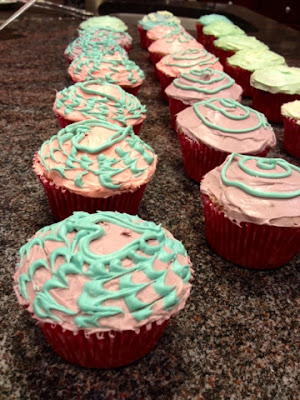 This week has been busy busy busy! Wednesday was my sister's birthday, so tuesday night we made cupcakes for her to bring to school :) Aren't they beautiful? She is getting so old! Four already! They sure grow up fast :') Besides for Kaykay's birthday, this week has been filled with lots of tutoring, indoor drumline, pit orchestra, and general busy-ness.  But among all the work, I managed to find just enough time to go running three times! I'm getting so pudgy sitting on my ass all day stuffing my face with food, so I decided to do something about it.  So. much. pain. After the first day I couldn't even get out of bed properly.  I guess that's what a year of inactiveness will do to you haha, how sad.  I am going to try to make it a part of my routine now! Let's see how long this lasts. Also, can we please direct our attention to the little green/brown hideousness that occupies the corner of this paragraph? That monstrosity is our indoor drumline uniforms for this year. Tragic, right?  It's made out of this velvet material, and if you can't tell from the picture, has the most awkward high-waisted pants ever. Dear lord. The best part?  Each one was $100.  When I first saw the uniforms I literally could not stop laughing at how ridiculous they were hahaha, oh god they are so ugly.

On saturday we had a party for Kaykay.  My parents invited all of their asian friends and we spent the whole day rushing around getting everything ready. My mom was super stressed out and kept yelling at me for everything, eventually making me cancel lunch plans I had.  I watched Kaykay, decorated, washed, cleaned, picked up food, cleaned, and cleaned.  Did I mention that I cleaned? Well, I did. By the time the guests started to arrive I was tired as hell haha. There were a lot of familiar faces, but some unfamiliar ones as well.  For example, the two brothers in this picture.  They brought their laptops and just gamed against each other the whole time. But actually, funny story about them.  So at one point during the party they were sitting next to each other, gaming away, and between them sat their mother.  And she was feeding them. Haha no I am not making this up.  She was literally sitting there feeding her grown children pasta.  They didn't even look, just opened their mouths and kept their eyes fixed on their computer screens.  I had to fight the urge to burst out laughing, in case they actually had problems or something and needed their mother to feed them. Honestly they seemed kind of weird, since they were giggling uncontrollably whilst shouting random gamer phrases and comparing lag-time in high pitched voices. But it turns out that they were just normal asian gamer-nerds, so I had a nice long laugh afterwards hahaha.  Around 11pm that night, my mom finally let me escape to go chill at Sarah's for a bit for her eighteenth birthday! Haha, told you it's the month of birthdays. Anyway, I got her a cute tea tumbler from Teavana (I love that place and the unlimited free samples).  I arrived in time to catch the end of "Bridesmaids", which was hilarious, and afterward we all just sat around, listened to music, and relaxed.  It was such a nice ending to a hectic day.

Today! (Technically yesterday now) was really relaxing.  Woke up late and basked in Asian-left-overs heaven with Nicole and Sarah.  Then we went shopping for the rest of the afternoon, bumming around the mall looking for a present for Nicole's mom (HA! Another birthday) and trying random stuff on.  I managed to make two purchases, both of which I'm very pleased with :) Both are from Abercrombie and Fitch, which is sort of a surprise since I almost never shop there. There's a green plaid one that's made of a thick soft flannel material, and a white-ish one that's made of I-have-no-idea-what but it's so billow-y and silky without actually feeling like silk. Hard to describe, but I love it. I was going to post a picture, but I'm all blogged out, and it's past 1. again.  I told myself I'd finish before 12, which sadly did not happen. Also my mom just walked out of her room looking super confused and disheveled and told me to go to sleep.  So I'm going to be a good child and listen to her....after all, her birthday is in three days! Oh February. Good night !
Posted by Sonya at 12:26 AM