First Omelette in the History of the World

Yesterday was Valentine's Day - love was in the air! The sound of sweet lyrics wafted down warm hallways.  Petals drifted past lockers, while adolescent girls blushed and shyly received gifts of chocolate and heart-felt poetry.  Hmm, or something like that.  Actually it was more like a regular crappy tuesday.  Except something exciting did happen. I can't really say it was exciting in a good way, but it was something nevertheless.  One of my friends got semi-asked out by another friend.  Which resulted in copious amounts of awkwardness and eye-aversions, but I think it'll work out in the end.  It was sad because he sent her a carnation with a note that said "Will you be my valentine?" and then had to pass it off as a joke since she freaked out.  Although I think it was a cute idea in theory, he should've known better than to ask her since I think she's made it clear to him that she isn't interested in the past.  Also yesterday, I was productive!  After taking a nap, I tutored, picked up my dad from the train station, and then sat down and studied Japanese smart.fm for 45 minutes straight!  That's 45 minutes more than I usually do.  Not bad huh?  Also I decided to start watching dramas again to improve my Japanese...or maybe that's just my excuse to watch more dramas.  Anyway, the one I'm watching right now is called ファスート♥キス which translates to "First Kiss".  I'm not exactly sure why that's the name of the drama, since so far it's about a girl with heart disease who goes back to Japan to visit her brother before she undergoes heart surgery, but I have a hunch that she's going to fall in love with the doctor. It's so predictable, but I love it.  Some people hate cliche endings and want something like "Inception" that's all mysterious and left unanswered at the end, but I personally love happy endings.  Bittersweet endings work well for me too.  So all you haters can call me boring, but I'll stand by my happy endings :)

Today was my mom's 48th birthday! I woke up at 5:30 to cook her breakfast, and decided on an omelette.  Don't ask me how in the world I decided to cook an omelette when I've never made one before in my life, but somehow I made that decision, and I'm glad I did! Success! Isn't it beautiful? The inside is filled with fried/steamed carrots and red peppers. Yumyum. School was average, what's new.  In AP English my teacher made a reference to my blog and suggested that I submit stuff to the school newspaper which is making an internet debut soon apparently. Yay for going green! But if only she knew about the extremely pointless, un-intellectual blog posts that I write haha.  Also recently, prom has been a huge topic that's popping up everywhere!  People are worried about who they'll go with, if they'll get asked, what to wear, where to go for prom weekend, etc etc.  The list goes on forever.  I find it funny how prom is literally four months away, and a lot of people are already prepared.  But at the same time I'm one of those people who are worrying! I kind of have someone in mind, but I half-hate him.  Is that healthy?  But as my English teacher once said (and as Nicole reminded me), "Love and hate are one and the same."  Or something along those lines.

Anyway, today was also the award ceremony and exhibition for the Scholastic Gold Key and Silver Key winners!  It was held at a nearby art museum, and since I won a Gold Key, I had my print hanging up on the wall! Exciting, no?  It was the pink/red/black linoleum block print that I posted about a while ago.  Anyway, the art there completely blew me away. I couldn't stop taking pictures!  I probably took close to 100 pictures (possibly more) tonight, but I'm only posting my absolute favorites....which is still a lot, so bear with me. Something really weird happened while I was browsing and obsessing over these paintings though.  I got a kind of sinking, overwhelmed sensation.  I feel like my art has lost it's feeling.  Or maybe I've lost my love of art.  Either way, I feel like I haven't drawn anything for myself in a long time.  Everyday I put all of my energy into what Mr. V wants me to do, and I accomplish things, but it just isn't as satisfying as it used to be.  Speaking of Mr. V, he went to the exhibition tonight, but left before the ceremony. He grabbed his free acrylic paint and t-shirt, and beat it after checking out all the art.  Smart man.  The ceremony took forever (and kind of sucked), but I digress. Anyway, my sketchbooks haven't made much progress since I started AP Art as a junior, and I view my art homework more as a chore, than as an escape from stress, like I used to.  Now it's what's causing the stress, which is kind of ridiculous.  I know this is cheesy, but I'm going to rediscover my love of art.  I'm not sure how that's going to happen, but it will.  I do have a giant blank canvas just sitting in my room somewhere..... Anyway, it's almost 1, and I don't want to ramble on anymore, so without further ado, here are my favorites from the night! 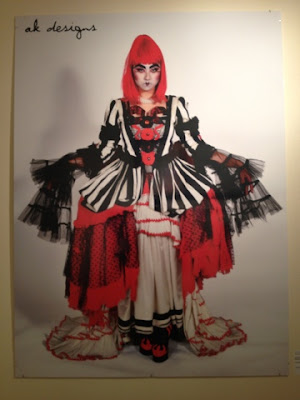