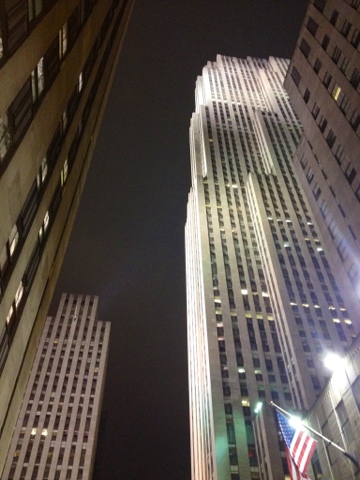 If the title of this post didn't already give it away, I went to NYC this weekend ! Victor's cousin just moved here from Shanghai on wednesday to go to boarding school in America, so he's living with Victor and his family.  Pretty cool huh? Anyway, he wants to be called Jeff, but I got used to Bing Bing first, so that's what I'm calling him. BB for short.  Right, so we arrived, and made our way to Times Square where we shopped, took pictures on the red steps, and found a place that sold $1 pizza.  The pizza was amazingly addictive, leading us to suspect that cocaine had been an ingredient.  Finally we managed to stop eating and did fun tourist-y things like go to the m&m factory and watch cool street performers.  There was one of those cool silver-spray painted metal dudes who made really good balloon animals, except he got kind of pissed of when the kids just took the animals and didn't tip any money. This one kid gave the animal back and ran away lol.  Also, I think there is some sort of pan-flute craze going on.  We saw like three street performing groups all playing pan-flute woodsy music.  It was so bizzare. We also saw this amazing graffiti artist who specialized in making city landscapes with different space-related backgrounds. He could finish a painting in less than 10 minutes and was just cranking them out for $20 a pop.  I'm not sure how long we watched for, but I probably could've gone on for another hour. Watching him was so captivating since when he started you had no idea what he was doing.  You just watch and try to guess what he's making, and the little buildings and planets just start appearing one by one.  It was absolutely ridiculous.  And of course lets not forget the caricature artists that lined every street.  Whenever I see those people I first get hit with a pang of envy for their amazing skill and speed, and then a burst of sadness, because these people deserve so much more for their art.  Next time I go to the city I've decided to buy myself one of those.  Also I've decided to learn how to draw caricatures so I can try doing that one day.  Another project to add to my list of projects that've never been realized.  Maybe I'll make a new tab on here that contains my long list of things I've always wanted to do but never had the drive or motivation to carry out. Haha but I am digressing again. 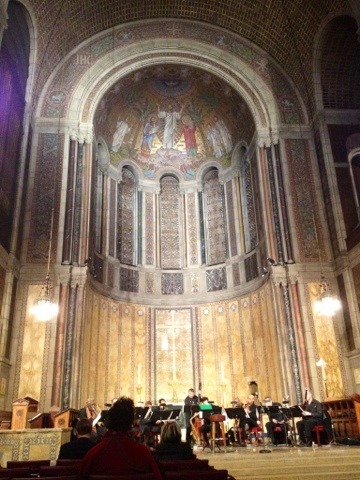 Anyway, Dan's cousin was here to audition on sax for NYU, so he joined us and told us about a free jazz concert he was going to that night.  It was held in a church nearby, so we went to check it out.  The church was absolutely amazing and so were the musicians.  The clarinetist was ridiculously talented and got really into the music haha. The only part that sucked was waiting there for over an hour since we thought it was supposed to start at 7 but didn't start till after 7:30. Anyway, we had to leave after only four songs so we could catch our train.  We were gonna eat at some amazing burger place, but had to ditch that idea, and also didn't have time to find a Pinkberry.  :(  So they tried to console me with Jamba Juice, but then we didn't have time for that either. My inner glutton was very sad.  But on the bright side, I was able to grab a quick dinner right before we got on the train from a street vender!  It was my first shish-kabob from a street vender, and it smelled oh so good.  The taste was extremely average, but at that point I was so hungry I didn't even care.  Also I tried to take a picture of the guy making my shish-kabob, but he ducked out of the picture and wouldn't come back until I assured him that I put my phone away.  Party pooper :(  Next time I come to the city I am definitely going to get myself some Jamba Juice.  I remember when I used to play Neopets (many years ago, I assure you), there would be Jamba Juice ads all over the website.  I can't believe I still haven't experienced it.  Anyway, on the train ride back we were all pretty out of it. BB slept, and the rest of us played 20 questions in a half trance-like state.  All in all, a very tiring but fun day!

Lol, we also made a quick 3 minute pit stop at the Poke Center (technically it's called Nintendo World now, or something like that) while we were rushing back to the station for our train.  Thomas didn't want us to go, but we begged him so he gave us 3 minutes haha.  I'm not even a gamer-nerd anymore, but that place has sentimental value to me.  I remember when my dad took me there and we bought little pokemon figurines.  I'm pretty sure I played with those on a daily basis hahaha.  Yes I was a cool little kid. I also think I'm starting to type too much as always, so I'll just give a quick run down of today. Slept alot, watched my Asian drama, ran around the track at the highschool with the whole fam lol, ate at this delicious Asian-Fusion place, and played a few hours of piano.  God am I rusty. Speaking of that restaurant, I'm thinking of applying for a part-time job there, but at the same time I'm really worried since I have little to no people skills, and being a waitress would probably require atleast some degree of human interaction capability.  Or maybe not, since our waiter today was pretty awkward toward us.  He seemed fine chatting to the old women next to us, but was mega quiet at our table.  Maybe because he almost took away my plate but realized that I was still eating, which led to awkward eye contact, and him flashing an awkward smile.  He was kind of cute though, and had his ear pierced.  Maybe we'll be co-workers... :) Hehe, good night!