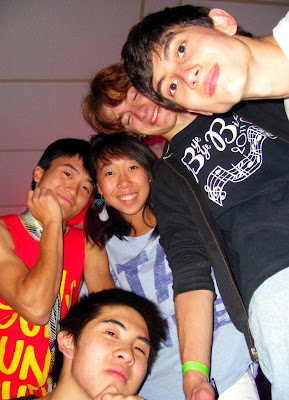 It's a song by Adele haha, if anyone was wondering.  The actual song isn't that great, but that one stupid line is stuck in my head 24/7.  Seriously, ask my basses, they probably want to punch me in the face whenever they hear it...which is every 5 seconds.  Anyway, this week was jam packed holy shit.  Monday after school I tutored Jasmin for an hour, then had marching band. Tuesday I tutored Neil for... 2 hours?? wtf ?!?  Wednesday I tutored Jasmin again for an hour, then had marching band. and Thursday I tutored Neil for an hour and a half.  Got paid $40 for 3.5 hours with Neil.  Like I know that's somewhat decent, but come on lady.  They are looaadded, it couldn't hurt to pay me a little more, could it?  I plan on cutting down the time though, staying 2 hours for a 7th grader is freaking crazy.  Especially when i'm busy with college stuff.  School wise I'm busy too.  Mostly just scrambling to finish my linoleum block prints that i've been working on for almost 2 months !! Jesus christ! I only have a week until i need them for my portfolio !  So last week I skipped a couple classes to work on it in the art room lol.  Mr. V was thoroughly amused (probably because he thinks i'm a nerd who never skips...which i am).  My math teacher found out that i skipped though lolol...that was an awkward confrontation.  This week is the last week before early action apps are due!  So i've got a lot of work ahead of me.  Somehow I'll get out of it with my sanity still intact. Maybe.

Friday was a great stress-reliever though! It was Emma's birthday ! Actually, at first it was pretty goddamn stressful.  Right after school I scrambled to get Victor's and Emma's birthday presents.  Drove dan to guitar center and we decided on a double bass pedal for victor.  He's been obsessing over one for god knows how long, so we decided to finally get him one.  The pedal was pretty expensive even with 5 people paying for it, but we got it anyway (and he loved it ^_^).  Right after I sped home, mara picked me up so we could go shopping for Emma's present.  We wanted to get her something womanly like heels or a tiffany necklace but we thought shoes could be risky, and the jewelry was only in triple digits.  Lol we walked out of that store with a new perception of life.  Not really, but we finally decided on some (fancy expensive) makeup from Sephora's.  Emma ended up really liking it too!  All in all, a very successful round of gift giving.  Friday night my mom got home from China!  After dinner with the fam, I went out bowling with a bunch of people in celebration of the two adults!  I can't believe they are both 18 now. 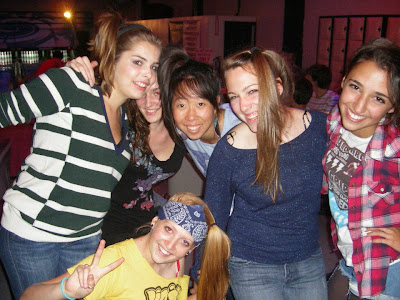 Bowling was really fun :) There was a tiny bit of drama with Sam and Alex being too PDA and Abby being a little antisocial/angry but besides for that, it rocked.  The theme was to dress weirdly. lmao.  Half the people did it, half of them didn't.  So i went for a cross in between with my feather earrings, striped leggings with shorts, and baggy T that said "Stay Alive" (Got it in china, which explains the text)  Here's us reppin' our so-high-it-should-be-illegal ponytails.  Of course emma would be on the ground...that's where she belongs! Just kidding, but she does spend an awful lot of time down there....again, i am kidding!  Haha happy 18th!! After the party, gabe drove me, thomas, brian, and sarah home.  I can't really remember if we talked about anything.  I was probably too tired from the 2 hours of sleep I got thursday night lmao.

Saturday!  Had to actually wake up early because Justin and Emma were coming over at 9 to make goodiebags for our sections.  Made them, went to the school, changed, got on busses, arrived at Scummit for the foot ball game, got annihilated, went back to the school, ate pizza, got back on the busses for our night competition!  AKA a whole entire day of marching band.  Notice how i'm trying to condense everything in this paragraph since it's 1:25 and i want to go to sleep.  So anyway, I sat with victor at the back of the bus, which was fun i guess, but it was so isolated from my section.  I kind of liked talking with everyone last week better than listening to victor tell me about his weed adventures (although they were extremely amusing haha).  While we were warming up, Itkor called over the other drumline that he works with (he is cheating on us!!!) and we all played the warmups together.  It was so weird having another bass drum playing the exact same thing as me.  Also he was behind me, so whenever he played, the back of my neck got hit with a puff of air from the stupid hole on his drum.  Their bass 2 was also the section leader and his name was ryan, weird huh?  I have decided that we will become best friends if i ever see him again in my life.  Anyway, the actual competition was a little boring since no one was actually pumped.  We still performed well though except for a couple of time-tears in the show :(


After the show, the drumline went to meet up with all of the other drumlines in the competition and formed this super conglomeration of drums.  Then we all marched out together playing the same cadence.  It was magical.  There were 10 drumlines there.  Aka about 50 basses. and 2389047 snares/quints.  Also there were some people in it who just had triangles or tambourines (i found this very funny).  Look i overachieved and even included a video in here! Fancy, huh?  The actual experience was sick, but it was also sort of boring because me and all the people around me were anti-social. Awkward to the max.  Anyway, we went home and then headed out to the Prestige Diner for dinner and stayed until 1 am haha.  Steve asked us to go play ultimate frisbee in the dark but I was falling asleep so I sent Miller and Mike home, and then went home and passed out.

Not much happened today at all.  Mostly just procrastinated on anything and everything I need to do with my life.  But something that did happen? ....my MIT interviewer emailed me and said I need to do the interview tomorrow !!!!! AHHH !!  I am so nervous! I also have to tutor Jasmin after school and go to marching band for about an hour before I leave for the interview.  Oh god.  Good news is Jasmin got a 100 on her last physics quiz ! I am so proud of her! :)

Okay time to sleep so my interviewer doesn't think i'm retarded when I can't string sentences together tomorrow.  Wish me luck!  Good night !
Posted by Sonya at 1:45 AM