As I type out this blog post, I can still hear loud cracks from trees splitting apart outside.  I woke up this morning to find that the world was covered in white.  Snow! In October?! I only enjoyed the snow for a few more hours before the cracking started.  Branches were falling all over the place, it was goddamn terrifying.  Since the leaves haven't even fallen off yet, all the snow was weighing down the branches, causing them to snap.  In the afternoon I got word of something awful that had happened.  Emma's sister's friend's older brother was killed in a car accident that involved a huge tree branch falling on his car.  He has a two month old baby.  I don't know him, but I was shocked by the news.  My mind has a lot of trouble dealing with death.  I feel like i'm in denial, but that's a topic for another day.  Anyway, I don't know whether it's better or worse that he has a baby.  He'll have to grow up without a father, but maybe it would make him (the father) happy that he was able to leave behind this imprint.  Regardless, me and mom agreed on one thing: a lot of bad things are happening this year.

Not much else happened today.  I spent the bulk of the day writing essays and stuffing my face with candy.  I also finished writing an artist statement and all the descriptions for my portfolio.  But still 3 essays left to write! Ugh!  The deadline is only 2 days away...

Lets back up to friday.  It was class pride day!  Almost all of the seniors wore the shirt that said "Senio12s Till the World Ends..." I skipped the whole afternoon (sooooo badass) to go to the art room and finish up some prints so I could pick one for my portfolio.  I decided on the red and black one to submit for sure.  But lmao look at how many I have! And that's only half of them.  After school Victor and dan took me to get some food before heading over to dan's for a 15 minute jam session.  I hadn't touched a bass for god knows how long, but it came back fairly quickly.  Dan was even surprised at how not-awful I was and showed it.  It made me feel all warm and fuzzy inside :) not really, but it did feel good to get complimented.  We jammed on The Adventures of Rain Dance Maggie and an original by dan.  It felt amazing to be with the band again.  I really missed playing bass.  After 15 minutes, it was already 4:40 and victor had to speed me home so I could get ready for the football game that night....we had to be at the school by 4:50 lmao.  I also still had to go pick miller up since he had asked me for a ride the day before. 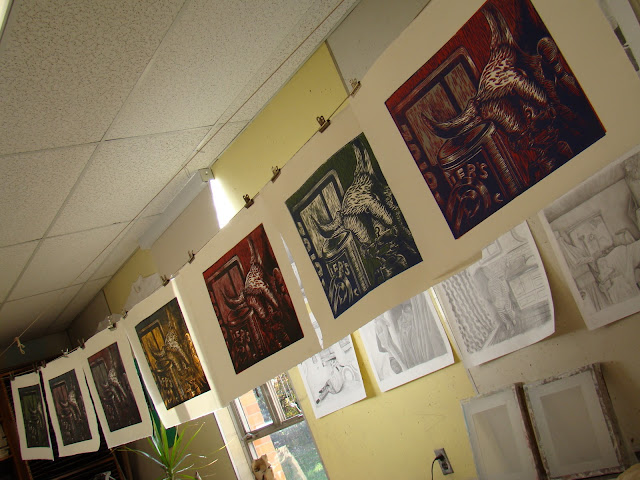 When victor dropped me off, I sprinted into my house like a mad woman, grabbed my dinkles and anything else that crossed my mind and was in my car 4 minutes later speeding to miller's.  As always, I was late, and he was semi freaking out.  But hey he should know by now that I am never on time.  Like come on, what do you expect?  On a side note, he smelled really nice.  Anyway, I digress.  So we got to the school about 12 minutes after we were supposed to.  On the bus ride there, miller wanted me to sit next to him, so I did and we played "guess the song".  He only has 72 songs on his ipod.  That was not okay with me at all. I was like WTF O:ILSEJrkJSHdfjdkfjgkj.  They were also all pop/hiphop/rap smh.  If he lets me I am going to change that.  Anyway, the game was good, our football team kicked their ass.  They had a really small marching band, but they were really legit.  After the show while we were getting food, their (only) bass drummer chatted me and victor up.  When we told him that everyone in his band left, he told me to friend him on facebook.  Then he was like "hell you probably won't, so here" and handed me his phone.  Being the retard I am, I couldn't figure out how it worked (my phone is prehistoric) so victor tried and succeeded in deleting one of his contacts lmao.  Anyway, victor eventually just gave him 7 digits of his number and gave the phone back.  Too bad I guess, but then again I wasn't very eager to have this guy friend me anyway.  He was chill though...we talked about anime lmao lmao.  Okay moving on to a less nerdy topic.  So last night, Miller probably put his arm around me like 4 times?  Uhhh hello?  Trying not to overthink it, but I can't!  I am a filthy cougar! He can't fuel my cougarness!  It is forbidden!! Okay, maybe I am completely over reacting, but still.  It's just so weird since it's a 2 year age difference and I'm the girl.  But it felt nice, just for the record (not the age difference, the arm-putting-around)  :) He sat across form me on the bus ride home, and we sat with our legs crossing over the aisle.  It was kind of adorable in a filthy-cougar-esque way.  This really shouldn't bother me so much, but it does.  Why am I wasting time worrying about this when I should be writing college essays ? Holy crap I should stop blogging too.  Hopefully tomorrow will be a productive essay day.  If it isn't, well then i'm thoroughly screwed. Okay goodnight!