My dad walks into the room and asks me a hypothetical question: If you got into rutgers and harvard and I told you that I'd give you 1 million dollars to go to rutgers, which would you pick?

My dad simply chuckles and says -- Oh I see, so you're basically saying that you can make more money if you go to harvard!

No actually, that is not at all what I'm saying thank you very much.  Are you kidding me?  Is that what he thinks the world is about? Pieces of paper?

When I asked him if he thought money was the most important thing, he confidently replied yes.  "In the end that is what it's all about"

Bullshit.
Money is important, but it isn't more important than life experience.  As cliche as this sounds: Money can't buy you happiness.  Maybe I just thought I would be happier at harvard than I would at rutgers (not saying it's a shitty school, fyi).  When I told my dad this, he merely laughed at me.  Nature vs. Nurture?  I think nature wins in this case.  In many cases actually.   Do I resemble my parents in any way?  Not really.  I have my dad's eyebrows, but that's beside the point.  You know what I mean.


Anyway, it's past 1, I should go to sleep soon if i want to get anything done on my college apps tomorrow.  Quick run through of the past few days: 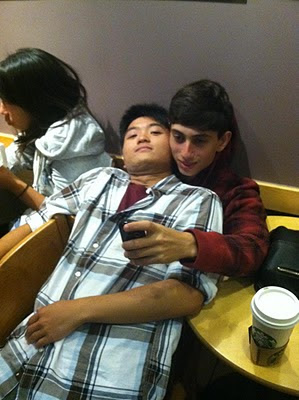 Friday I did nothing, wasn't allowed out, big surprise.  Today we had the fall preview at school for the marching band. AKA wearing my drum from 11:30 - 4:00.  Fml my back is killing me.  Afterwards I went to McDonalds for a while and just hung out with some people.  Made dinner with emma, got annoyed at some people, but that's a story for a different day.  Or maybe just never, I'm too tired to type it all out now, and too lazy to type it later.  Let's just say it's frustrating being the third wheel.  Also tonight we went to go see a movie !  Well technically at first it was sold out, so we waited for the later showing by going to starbucks/panera.  That's us at starbucks, more specifically victor and dan getting it on.  Or victor getting it on and dan casually checking his texts.  The usual.  And hey, you can see me in the corner!  Exciting.  I apologize for the random picture, but I couldn't not put a picture in this post.  It just wouldn't feel right.  Anyway, split a delicious tomato & mozzarella panini with sam and we went back to the theater to watch 50/50.  It's the new movie with Joseph Gordan Levitt (he's gorgeous) and it was fantastic.  Most of the movie was subtle (except for when he has a 10 second breakdown), nothing too dramatic or anything.  It was all suggested, I loved it.  It's hard to explain, so you should go watch it for yourself!  After the movie I came home and was yelled at for 15 minutes straight.  It was great.  They yelled at me because I didn't tell them who I was going with (they didn't ask), I didn't tell them the movie time was changing, I killed time at panera instead of doing something productive (wtf), and I got home late (12) even though I don't have a set curfew.  Goddamnit, I am not a little kid.  I am a senior in high school.  Get it?  Apparently not.  I was creepily calm during the whole lecture though, I think I have the movie to thank for that; it fazed me out.  To be honest, I didn't give a shit the whole time my mom was yelling.

I was finally let out for one night (I have no idea how it happened though) so it's time to work my ass off tomorrow! :) They'll see.