日本に着きました！We're finally here!! I decided to keep a journal of my trip so I don't forget anything. :)


Right now we're over the ocean (and the clouds) only half an hour away from Tokyo! It's 12:25 am or maybe it's 1:25 pm. How do you count that anyway? We're obviously not in america anymore, but we haven't arrived yet. Being on a plane completely screws up your perception of time. On the plane ride I watched two movies: The Allure of Tears (a really good Chinese movie) and New Years Eve. I also unsuccessfully started The Girl With The Dragon Tattoo and Hugo but my short attention span prevented me from getting more than 20 minutes into either. That accounts for about 6 hours of my 14 hour flight...what did I even do for the rest of it? I think I spent most of it drifting in and out of a weird semi conscious state. Sleeping on planes is so difficult.

"Our flight will be in Narita airport in a few minutes" just came on the PA! Aahhhhhhhh holy shit okay they also said to turn off phones. Bye!

We've landed! Also I'd like to add that the girl behind me didn't get up the whole trip. She literally did not pee for 14 hours, but drank a lot. What kind of bladder is that? I'm jelly.

Now I'm at the hostel in Asakusa! And they have free wifi :). Being in Japan is wild. Everyone is so kind! Today we got settled down in our (minuscule, but very cute) hostel, we went out to explore a beautiful temple in Asakusa that had ginormous lanterns before taking the subway to Shibuya! It's kind of like the Japanese Times Square according to mr. Mitchell. It was とても賑やか！Very bustling and lively. The streets were lined with countless restaurants and shops that were piled one on top of another. It was completely packed (with people who all dress really well) and there were really talented street-side bands performing originals (I got a demo CD!) As soon as we got there, we decided that our first priority was getting food since we were all starving. After awkwardly asking around, we eventually got herded into a ramen shop by a pack of high schoolers who were punching and kicking each other. I think they found it extremely amusing that we asked them where we could find the best ramen. Anyway, they did not let us down holy shit the ramen was delicious! I got a spicy kind with bamboo, sea weed, pork, leek, eggs, and other delicious unnamed things. The noodles and broth were so rich! Yumyum. After shamelessly stuffing ourselves, we browsed a few shops, all of which were blasting extremely explicit songs haha. Literally as soon as you walk in you just hear "fuckshitniggahfuckshit". I guess it's because they can't understand it haha but it was oh so amusing for us. :) After that it was time to meet up with the group and take the subway back to Asakusa. On the way home everyone was dropping like flies. At one point me and Nicole were the only two on our side of the subway car that were awake. Everyone else was out cold including some strangers and this one guy who seemed to be sleeping on his feet. We got a little lost, but eventually found our way back. Now I'm tired as hell since I haven't slept in almost two days straight, so good night! 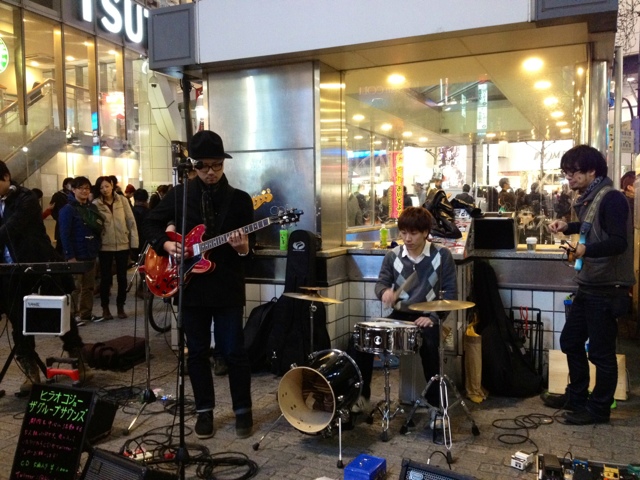