I'm currently sitting on my bed in a Buddhist temple (!!!) as I type this. This morning Mitchell had to go with the two kids to Nagoya to search for the passport and rail passes. Since he wasnt here to take us to the golden pavilion and the other super cool place we were supposed to go, we just bummed around in the emperor's garden nbd. Actually it was pretty boring even though the place was huge and gorgeous. We spent a lot of time walking on gravel, that's probably why.

We quickly got lunch in the basement of one of the giant department stores, and then grabbed some delicious Baskin Robins (love potion ;) ) before hopping on a train bound for FUKUI. Actually before that we had to change at Kyoto station. Luck would have it that none of the goddamn bathrooms on our platform had western style toilets. I had to go really bad though so I took a gamble and overcame my fear. Not really though, those squatters still terrify me. Anyway, on the train ride there I was really nervous. After my hosting experience last month I was scared that my host family was going to hate me. The city landscape gave away to rural Japan. We passed villages and large tracts of flooded farm land. Soon there was even snow on the ground, and not long after that we arrived at the station ! We were greeted by the Japanese teachers and some students who had tagged along. Among them was Arachi! She bounced over to me and hugged me, which really surprised me. Then she promptly walked away and we never talked again lol.

We walked to their highschool which was giant and had about 4 stories. It was arranged in a giant square with a large garden in the center. Anyway, we turned into the walkway leading to the school and saw a bunch of students waving to us through the windows. We walked in, found our host students, and went to a large room where we sat down at tables with our student and their parent(s). Their teachers gave speeches that went completely over my head, and Mitchell gave one too (which I also couldn't understand). Then we had to stand up one by one and (awkwardly) wave to everyone. My girls mom couldn't make it, so we waited for Kitagawa sensei to drive us. While we were waiting, another teacher came over to me and said "Yui". I was confused at first because I thought he was calling me that, but then I realized he was saying the name of my first exchange student from over 2 years ago! Before I knew what was going on, he had Yui on his cell and handed it to me. It was really nice to hear her voice! But our conversation was really confusing and short since I had to go, and she spent most of the time apologizing because she couldn't come visit, while I spent most of the time assuring her that it was okay.
In the car to her house, the TV was switched on to the news (yes they have a TV in their console), and there was a story about the car accident that had happened in Kyoto earlier that day.  We were only a few blocks away from the accident when it happened, there were at least five helicopters flying over the city, and sirens were going off everywhere. According to the news, a man driving a minivan ran a red light and hit around 16 pedestrians, most of whom were tourists. Eight were dead, including the driver. It was crazy to think something like that could happen so close by. I feel like everyone has this weird conviction that bad things can't happen to them, you know? Sometimes we take it for granted how fortunate we really are. 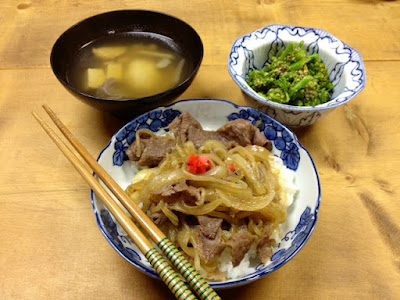 Anyway, we arrived at Shizuka's house...which turned out to be a Buddhist temple! It was gigantic and very traditional with sliding paper doors, bamboo floors, and long corridors. I loved it. For dinner her mom made gyuudon.  It's beef and onion over rice.  I learned that when you have a dish where you put some sort of meat or topping on top of rice it's called ~don.  In this case, beef (gyuu) over rice = gyuudon. I dunno, but I found that pretty interesting so I included it haha. There was also a cold broccoli sesame side dish and some miso soup, both of which were also delicious. I was told to say "itadakimasu" before eating and "gochisousamadeshita" after eating. Obaachan (her grandma) kept trying to talk to me, but wouldn't look at my face, so I'd get really confused as to who she was talking to. Shizuka explained that it used to be less socially acceptable to look people in the eye when talking to them, and her grandma never grew out of it. Aha. Anyway, after dinner I spent a good amount of time sitting under their HEATED TABLE. Oh my god I was obsessed with that thing.  It's a low table surrounded by cushions that you sit on, you pull aside the blankets and stick your legs underneath the table into a giant pit with a glowing heater in the middle. It was heavenly.  I would spend all day sitting there if I could. We talked a lot, exchanged presents, and she helped me a bit with my science presentation (that we had to give infront of the Koshi High School students the next morning).  I finally trudged to bed at around 1 am and passed out on my warm futon.