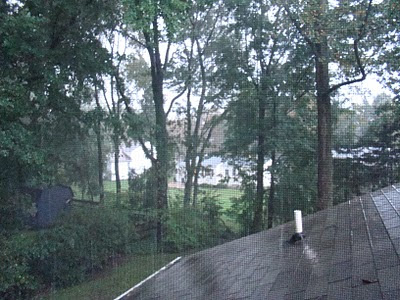 So I'm sitting here attempting to almost work on my college apps for once, and it starts pouring outside.  Like one of those instant downpours.  I throw open the window and turn off the lights, and now i'm basically sitting in darkness and listening to the rain.  Does that sound emo?  But I love the rain and especially how it smells and feels.  Might've inherited that from my dad haha.  I remember when I was little, I used to always see him standing at the garage door just watching the rain and humming to himself. I thought it was weird.  Now I can kind of relate to that feeling, or maybe I'm just weird too.  That's a picture of the rain outside my window, in case you were wondering (it's a little hard to tell).  WOW I have no life. 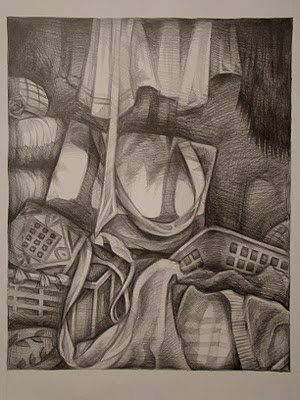 Nothing's really happened in the past few days.  I went shopping for the first time in a billion years which was fun, and that's pretttty much it.  Stayed up until 3 on monday night working on my closet picture.  Probably failed that chem test.  Joined bio club because sarah told me to, but ended up slightly pissed off because me and sarah were going to do an event together, but then she drop-kicked me cuz gabe showed up.  And she complained to me that she feels like she doesn't have friends because she is always hanging out with gabe.  Well then.

Zain (my little frosh bass drummer from last year) said hi to me the other day which took me by surprise. "Son-Son" (pronounced "Sawn-Sawn" it's his stupid nickname for me) He quit drumline this year because he couldn't juggle marching band and soccer at the same time.  I kind of miss him even though he was really annoying.  I think I'm slightly bitter over the whole thing, which is ridiculous of me.  I only started thinking about this recently because while sorting through pictures for my highschool memories album (I'm making one at the end of senior year) I found a picture of us from last year's band camp.  Lol neither of us are even looking at the camera, but I really like this picture for some reason. (look, i have long hair!) 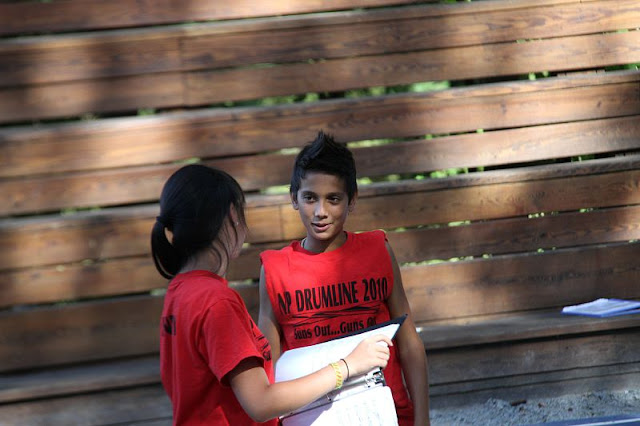 Oh wow I love rosh hashanah.  Getting a day off from school is so relaxing!  I woke up around 1 today, and finished brunch (ramen) around 3 lmao.  Then spent a few hours doing nothing and playing with my sister before eating chicken fajitas for dinner (yum).  Then kind of worked on my MIT app and managed to (sort of) answer 2 out of the 7 short essay questions. Yay!  Now i'm sitting here typing away and stuffing my face with sour patch kids.  I'd call it a day well spent.  I feel like I had homework, but I really don't care, lmao.  Time to sleep!
Posted by Sonya at 12:27 AM