Inspirational lyrics brought to you by my fellow Shalomie, Daniel.

So yes, friday was our show at 1307! (1307 is the local highschool hang out thing that's held once a month at the church.  Live bands, DJs, dancing, acoustic lounge, etc.)  Right after school I went home to take a power-nap.  It was a pretty shitty nap since I was too busy yawning to actually fall asleep. Yuck.  But at 4, I drove over to Dan's for a final practice before our show.  The practice went well, I was kind of still out of it from my pathetic nap.  Anyway, sam and emma showed up with cookies and brownies ! You guys are the best :)  The cookies had red letters on them that spelled out "Shalom Dragon" and then random jewish symbols and chinese characters hahahaha. Oh racism. Anyway, I rushed home, found something to wear (and trashed my room in the process), then sped over to the church....14 minutes late. But hey, who's counting.  We listened to a "no profanity in songs" lecture and then went downstairs for some free pizza.  There was jalapeno pizza, which was kind of awesome, except for that fact that it made victor puke and then gave the rest of us shitty stomachs. After pizza, we had to gather in a circle, in the dark, around a candle and listen to the preacher preach.  Kind of awkward because I'm agnostic, and I was standing between Victor, who isn't religious, and Dan, who's Jewish.  Lol.  Then we had to pray, which again was kind of weird for me.  Lmao, during it, Victor made a kind of disgusted grunt, so I turned in surprise at how blatantly rude it was, but turns out it was only because he was about to puke. Whoops. 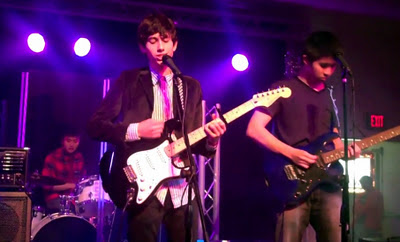 Soon, people started arriving and we had to do soundcheck. And then it was....SHOW TIME. AHHHHH.  Standing up on stage was kind of terrifying.  Thank god I had my friends standing in front of me screaming their faces off.  At one point Emma ran up and pretended to lick my bass lmao, that got me to loosen up a litttttle bit. Usually during the songs me and Shendt look at each other and goof off, but when i looked over at him during the show, he looked so serious and tense....so i looked away.  Gabe described him as looking like a serial killer.  Sarah told me I looked miserable.  All in all, it was a good show! Emma told me later that a group of guys next to her were saying how we might be their new favorite band :)  They also said that Dan was really good! 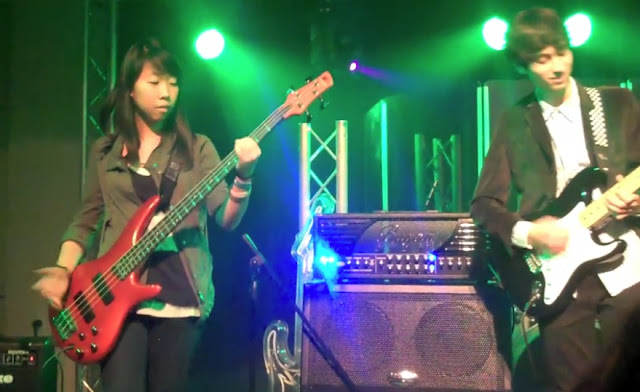 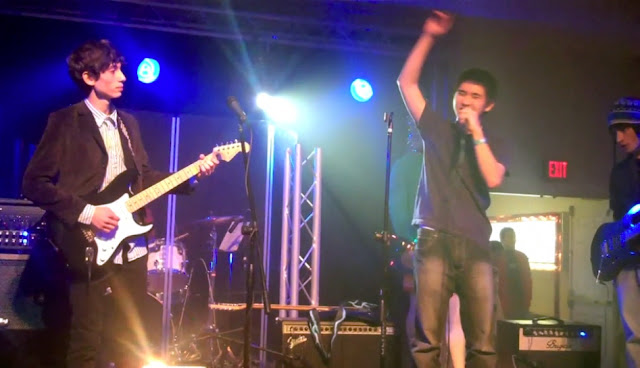 Saturday was surprisingly productive.  I got up super early for dim sum with the fam at the Dynasty.  And by early, I mean 11 lol.  Anyway, the food was amaazzinng and of course I ate too much.  Then we went and bought a karaoke machine lol.  How random is that ? Then I went to the dentist's for a "cleaning". AKA they found a deep cavity and I had to get it drilled and filled.  Yay for Novocain that lasts for 9 hours!  So that severely sucked, and my mom let me drive us to the mall out of pity.  We went to XXI Forever, and I got myself a sweatshirt and a t-shirt that has an owl on it with the words "Whoo Loves You".  Emma says that my sweatshirt makes me look like a stoner in a good way lolol whatever that means :) But regardless I lovvee it.  It's so soft and warm! Anyway, moving on, after the mall we picked up some delicious take out and brought it home for dinner.  Somehow I managed to move my mouth and eat the food even though I still couldn't feel half of my face. Goddamn drugs. Later emma came over, and we knitted for a bit. I am so close to finishing my scarf, I can taste it!  During school the other day, Helga (old hall monitor lady) stopped me to ask me if I was still knitting lmao.  She knows me from when I took fabric arts sophomore year.  So we had a nice conversation about knitting and whatnot, and she told me I could come in sometime next week so she can teach me how to put fringe on my scarf. lmao i am such a nerd. Again, i've digressed. So after a while, Dan and Victor came to pick us up and we went to Red Mango for some delicious froyo, even though it was freeeezing outside.  Then we headed over to Dan's for to play some Taboo.  It was girls vs. guys and we kicked their asses pretty hard.  We didn't feel bad about taking advantage of the fact that they were both high, and therefore mentally slow. :) So we conquered, and then ran out of his house to victor's car at around 11:58, praying that we'd make our midnight curfew.  Didn't work out so well, but we were close haha. Got home and saw my dad jamming out on the karaoke machine, so i joined him and we sang some Guang Liang and some Lion King together. Hahaha father daughter bonding to the max.

Today I woke up relatively early for my lunch date with a friend who recently got her license! Sadly she canceled (she canceled on me last weekend too) so I guess I will hold onto her driving present for another week! Anyway, I ended up going to Panera with Mara, Abs, and Nicole.  It was really fun, and refreshing since I haven't exactly gotten to kick back with them for a while.  Well, atleast not with Abs.  I got a mango smoothie which was incredibly filling and super delicious.  In the car ride back, some awkward shit went down, but hopefully that's fixed.

Nothing else really happened today. I spent too much time doing nothing, as usual on a sunday, but then I went to DD with Nicole for some delicious mint hot chocolate. That stuff is the shit man.  We also got free donuts since they were closing :). Afterwards we just sat in my car, ate, drank, and talked about random stuff.  A good ending to a relaxing day.

Oh lol, I also have a funny story before I end this post.  So you know how I mentioned that I wanted to take a nap after school on friday before the concert? That's because I went to sleep at 1:45 on Thursday night (Friday morning) and then woke up around 3:10 and took a shower, washed my hair, and got dressed for school lmao.  When i looked at the clock it was 3:45 am and I was like WTF that's gotta be wrong. So I checked my phone and sure enough it was 3:45.  So I changed back into pajamas and slept until 6 when I was supposed to get up for school.  Lol what is wrong with me ?  My guess is that I sleep-walked and then sleep-showered. Wow I need to sleep more.

On another note, my MIT decision should be coming out this week! Shit! I am sosososo nervous.  A bunch of my friends have already gotten rejected from their reach schools, and I feel like I'm just gonna be another rejection. The tables aren't really turned in my favor. 0 people have gotten into MIT from my school. Ha. On the brightside, victor got into Rensselaer yesterday !! I am so happy for him!  Also jealous because now he is in college and can fully embrace senioritis.

Okay crap, I've written a novel.  Why are all my posts so long ?!?! Also i've neglected my mountain of work, so i'll just force myself to stop blogging now.  Good night :)
Posted by Sonya at 6:26 PM