Today was band awards.  Well, technically, last night seeing as how it's past 1 am again.  Sarah pointed out to me the other day how all of my blogs end with a "goodnight!" or "oh crap it's 2, night" etc.  And she's right. But again i'm getting off topic, this time before I even got on topic.

Maybe I should give a quick run down of my day before I get to band awards.  So today I had a ridiculously hard time waking up for school.  Ended up being late. Again. It's my 6th late in the past 2 weeks. And tomorrow i'm skipping, so that means I have either 2 abscences or 6 lates left before I lose credit for the marking period!! ...and we are only 2 weeks into the marking period. But honestly Brem is ridiculous.  If I walk in 20 seconds after 7:10, it counts as late.  Tragic.  Anyway, school was busy.  I went around shooting videos of marching band seniors for the video I made for marching band awards.  Each senior had to say pick a favorite band memory and share it.  Some people were just complete jerks and told me they hated marching band.  Haters gonna hate, but the video was a success, so they can stick that up their asses.  Uhh anyway, during classes I worked on my CMU essay lol.  Today our lesson got canceled, but Mr. N said we could go down and practice in the band room if we wanted 5th period.  So I said i had a lesson, and just sat there and wrote my essay hahaha...and ended up not finishing it.  After school I was stressed as hell and ran around like crazy trying to finish editing the video (stayed up till 3 on wednesday) and getting ready for awards.  I also managed to cancel tutoring with Neil today because that would've just killed me.  But the good news?  We were only 15 minutes late to awards, and I finished the video!  Sadly I didn't get any pictures from tonight, but I'll rip some from facebook once they're up. 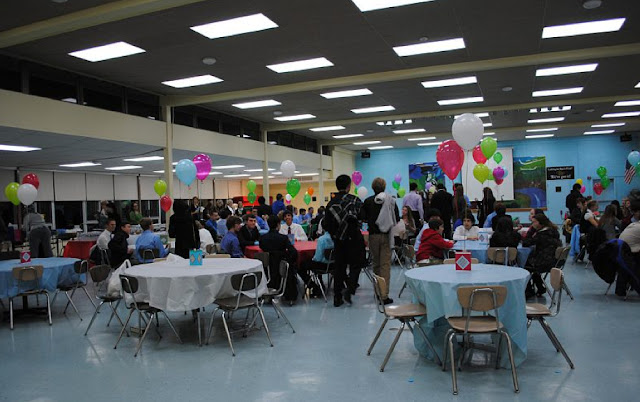 Dinner was good, and the cake was AMAZING.  Well, the taste was yummy, but the decorations and size were just ridiculous. The awards were so bittersweet!  It felt nice hearing all about our season again, but I was so sad it was over.  4 years.  Probably the best decision I ever made in high school (next to quitting swimming lmao).  I'm really going to miss it! Okay I can't drag this out because I really need to go to sleep.  So we got Itkor a silver cowbell with our names engraved in it, a Kalimba with "NPHS Drumline 2011" wood-burned into the back, and a t-shirt with a picture of Drumline (the movie) but I photoshopped Itkor's face onto Nick Cannon's body lolol.  No, Itkor is not black.  I think he really liked his gifts though, but somehow it was really awkward this year and he didn't give us the handshakes that we usually get :( . Gabe got up at the podium and gave the most hilarious speech about James.  Not sure if you can call it a speech really, since it was just random talk, but nonetheless fantastic.  He got James a huge bag of McDoubles and made James eat them while he talked about his memories of James and how he was going to miss him.  It was adorable! Gabe is such a good people-person.

On a side note, I wore my first pair of real heels today!  They were murdering my feet haha.  It felt amazing when I finally took them off.  But when I wore them I felt so goddamn tall.  It was absolutely fantastic.

Lolol I'm skippping 0 and 1st period tomorrow so I can avoid the health test (on the reproductive systems, yay!) and the AP Psych test (lol I don't even know what it's on).

But you know why I feel totally okay with skipping?

....Because I finished my Carnegie Mellon App!  Submitted it 8 minutes before the deadline lmao.  Asian Albert did 10 minutes.... I beat him.

So goddamn stressful.  I better not do this again to myself for the December 31st deadline....dear lord.

Anyway, time to sleep! Shalomie practice tomorrow! Our show is next friday! Lol so much enthusiasm in this paragraph so far.  Good night!
Posted by Sonya at 1:04 AM