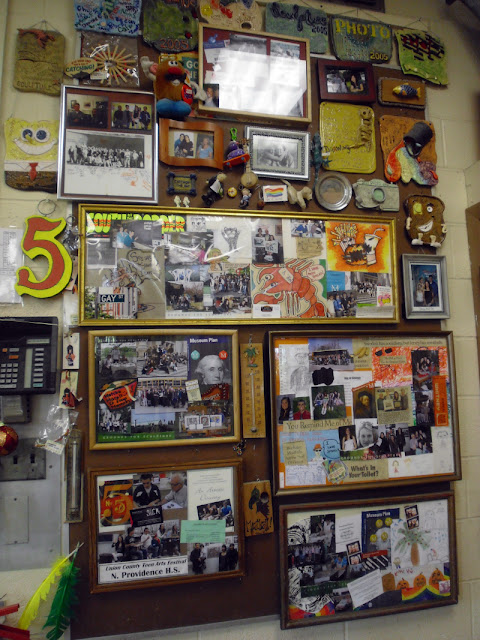 So remember that post-Christmas-post I promised you guys? (Oho I am so clever) Well, here it is! It's probably going to be a lot shorter than what it would've been if I had posted it in time, since my memory has as much storage capacity as my almost-full computer.  Yuck, I have to delete files everyday just to make sure it doesn't freeze, but I digress.

Anyway, last last friday I got my hair cut.  It was a pretty chill day actually....broke into the art room nbd. Lmao, I felt so proud of myself.  Somehow this random door to the school was open, but the art wing was locked. The school was dark and deserted; I felt pretty creepy.  But I didn't bring home the materials over the break I needed for the homework, soooo the B&E was necessary.  Any way, I found a sketchy door open to the auditorium.  Felt my way across the stage in the pitch black, walked around and behind the crew area behind the stage, managed to get into one of the art rooms, clumsily navigated through the winding dark room, and finally made it into the right art room! I felt so clever.  Managed to stay and work on my painting for almost two hours, blasting music....until a janitor found me and kicked me out hahaha. Took some pictures! I looove the art room.  It's filled with so much random junk. 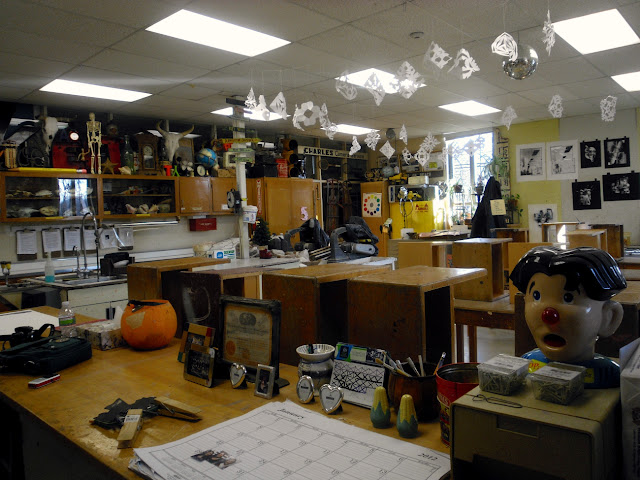 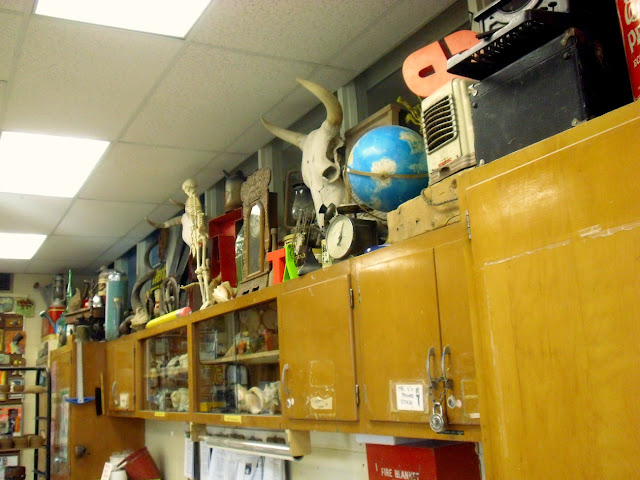 Saturday was December 31st and I went to the city with some friends!  We almost called it off, but decided to go anyway at the last second, and I'm so glad we decided to go :) After a long (and cramped) train ride, we got there and wandered around looking for korea street.  Somehow managed to find it thanks to my amazing navigational capabilities (lol jk, nicole's mom told her to follow anyone except for me), and eventually got lured into a Korean BBQ place called [Shilla]. It was delicious.  I got this spicy tofu and kimchi dish that was served over white rice and came in a pot, still frying away.  Anyway, we ate, and were merry.  What's that from? I forget. So we eventually left to go check out the christmas decorations and of course the giant tree! At one point we got lost (no I was not leading the group) and ended up kind of walking with a huge mob. Okay, it was somewhat sparse, but it still counts as a mob. Since it was New Years Eve, everyone was pooling into Times Square to get ready for midnight.....it was 3pm holy crap.  Anyway, a police officer told us we were going the exact opposite direction of Rockefeller Center (again, I was not leading the way), so we spun around and walked two blocks until we got to the tree!  It was nicole's first time seeing the tree so she took some pictures of it, and I made her take pictures with it lol.

Then we were a littttle bit pressed for time, but I insisted we go to Pinkberry. Best. Decision. Ever. Holy jesus I love their frozen yogurt! It's a little more tart than Red Mango and Sweet Orange. Also a little more expensive, but hey it's worth it.  Ha, look at me, the frozen yogurt connoisseur.  Also, Harvard Square has a Pinkberry, so I'm all covered for college :) Anyway, we got to the station just in time and boarded the train home! After a quick dinner, I headed over to mara's for the new years eve party! Holy POOP her food was so goddamn delicious.  My food baby from NYC grew to like 11 ounces jesus christ. I literally could not stop myself from taking bite after delicious bite.  Funny thing that happened at the party was one of my friends was totally high and came anyway.  It was a little rude, and I felt bad that mara had to deal with him (not to mention a couple of drunkies that stopped by for a bit) but it was extremely entertaining for a little while...until it got old.  But thankfully he sobered up...eventually lol, and was mortified by the videos some people took of him.  We eventually ushered in the new year with glasses of sparkling cider that shone and reflected the joy and hope evident in our bright eyes.  Yes that's my attempt at being dramatic and optimistic.  But we did drink some sparkling cider and it was pretty exciting to leave behind all the stress of 2011 and look forward to new beginnings that'll take place in 2012.  Awn what a great way to end a blog post :) too bad I'm not done yet.

Sunday! Ed came up to visit! My dad also decided that we were gonna go out and get my iPhone that day, so we had to drag Ed with us to the mall.  Sorry about that haha.  Had some delicious quesadillas at Qdoba and then went home and gave him the grand tour of our town. which probably took all of 5 minutes. Lol I love suburbia. Anyway, we ended up spending the day building my lego Robbie House and playing video games with my sister (she kicked his ass).  After dinner at the diner, I drove us to Red Mango (yes, frozen yogurt two days in a row, no shame) and we sat and just talked for a while.  He told me that he was a very serious animal-crayon artist.  I laughed so hard I could barely eat my froyo hahaha.  After that he had to drive home, but it was a really fun visit!  He even brought me presents....a coloring book and a box of Hello Panda snacks hahahahaha, both of which are coming in handy.  The other day at drumline I was eating a Hello Panda pouch, and this girl comes up to me and says "Sorry, but can I just say, you are really asian." Can't deny that haha. Oh so an anecdote:  Once a long time ago I wanted to melt the chocolate on the inside of the Hello Panda crackers so I stuck the little pouch into the microwave.....the pouch is made of aluminum. Lol, it exploded and the pouch was bubbling when I sprinted to the microwave to turn it off. Bubbly metal, yum. You know what else is yum? Hotpot. And on that note, good night!