One Week of Madness, Mall Madness. 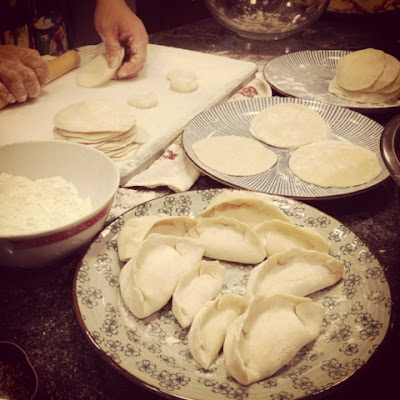 AKA the best game ever created by humankind. Haha well not really, but close enough.  Anyway, that title is a little misleading, since it implies that I've been playing Mall Madness all week. Which I haven't, I assure you (I only discovered the magic of that game tonight). However, this week was full of madness, midterm madness that is.  Holy crap I crammed so much and probably got around 4 hours of sleep per day.  But thankfully the pain is over, and out of my midterms I got 4 A's, 1 A-, and 1 B (which was in AP Lit and probably the one I'm most proud of haha).  I need to stop cramming. Like seriously. If I want atleast 50% of my hair to stay black by the time I graduate college, I should probably cut back on my stress levels.  Anyway, here are some pictures from the week that I haven't had a chance to blog.  On monday (while I was studying math) my parents made dumplings for the new year! My dad bought some flour and made the peels from scratch. Usually we just buy the peels pre-made, but since the new year is a big deal, he put on his sassy apron and pulled out his dumpling-peel-making skills. Just look at that concentration! Pure genius. 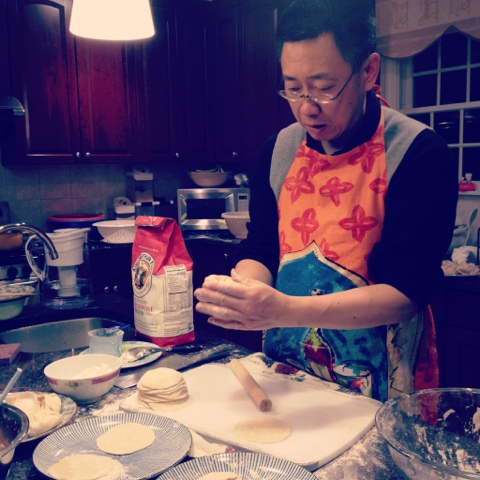 Also on monday, I had my first pit-orchestra practice! For most of the songs I have to quickly jump from timpani to glockenspiel, to cymbals, to triangle.  I was like running around completely clueless hahaha, hopefully I can get my act together before we need to accompany the singers. Fast forward to wednesday since absolutely nothing else happened besides for more mental torture. Anyway, I had my art midterm so Mr. V taught me how to dip the zinc etching plate I had worked on in class in acid. Here's a quick rundown of the whole etching process just to clear things up.  So first you start with a little rectangle of either copper or zinc.  Mine was a zinc plate that probably measured about 6x4. Then I coated it with this disgusting black goey crap that stains your skin unless you scrub it off with paint thinner (also disgusting). Once this layer dries, I used a needle-esque tool to draw onto the metal.  So basically I was scratching away the asphalten (black crap) to expose the metal underneath. Then when I finished the drawing, we dipped it into a bath of nitric acid which ate away at the exposed metal parts AKA the drawing that I wanted to end up with (the black stuff is acid-resistant). When the zinc is reacting with the acid, I got to use a feather to brush away all of the gas bubbles that were forming in the cracks.  Personally I thought the whole feather thing was one of the coolest parts.  It felt so ancient and enduring. Not sure if that made sense, but yeah.  Anyway, the final step is to pour paint thinner and denatured alcohol onto the plate and wipe away the back stuff.  You are left with a zinc plate with your picture carved into it. :) Then the only thing left to do is ink the crevices, scrub the ink off the surface, and run it through the press. Here are two of my prints, drying on the line in their half-finished glory. Today I used this weird speckle method to coat the background and then dip it in acid, so I haven't gotten a chance to print the final stage yet, but those should be done next week sometime.  I'm excited to see how it'll look like done, but at the same time I'm nervous that I screw it up by adding a speckled background. Okay, I'll stop rambling about confusing art stuff now.
So this post is starting to get kind of long which is weird since I usually only blog super short posts that are straight to the point. Maybe it's because it's almost 3:30 am. Maybe. Anyway, see that wheel on my desk? It's the Chinese zodiac poster that my mom made to bring to Kaykay's school for her presentation on chinese new year (I drew all the little animals, and they're all holding signs with their characters on them). She also made springs rolls, stuffed red envelopes, and taught them how to make their very own paper lantern.  When my mom starts some sort of project, she really puts herself into it, worrying over every little detail and trying to make everything perfect.  I think that's where I get it from. -_- Thanks a lot mom. Below the wheel is my art homework for the week.  It's kind of hard to see, but we replicated a regular loose leaf page and then had to doodle whatever we wanted on top of it.  It's one of the more free projects we've had in a while and technically it was due today buuutt that didn't really happen, so Mr. V gave me until monday. Today I was frantically trying to finish it during band, second period. Lol, everyone was playing music and I was literally just sitting on the ground behind all the xylophones, doodling my brains out. Speaking of brains, I should go experience some delta waves. Oh psychology. Good Night ! 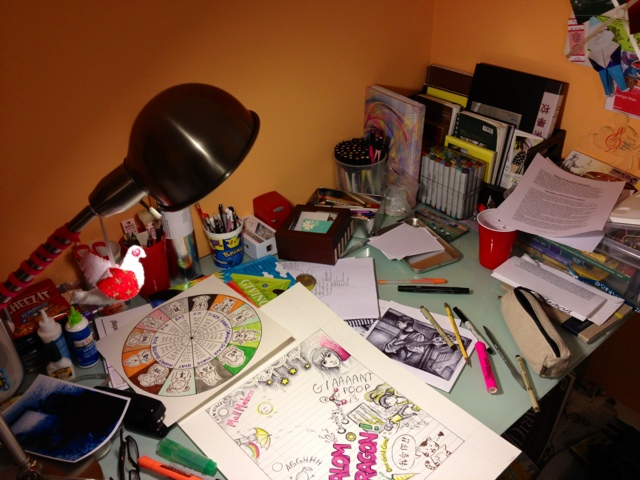