So I just got home from band camp a few hours ago!  Like how i'm blogging about this right away, but haven't done china yet?

Turned out that our freshman (Bass 1) decided to come to band camp late in order to play in his soccer game (which he technically isn't supposed to do since he's a bass drum) and ended up spraining his ankle! Now he's out for atleast a week.  Itkor got pretty mad.  I was annoyed too, even though i felt kind of guilty because after all, he DID get hurt. But still, if he had just came up to band camp with us, he would've been fine.  Also, he's the one who needs practice the most out of all of us, and band camp is best place for him and his ego to get a reality check.  Ryan suspects that itkor wants to replace him with Matt Owww but i doubt that's the case or else itkor would be the biggest idiot on the face of the planet.

Moving on.  Funny story, so today ryan decided to throw my mallets across the pavilion, and eventually they landed in the bathroom.  When i went in to get them, they closed the door and held it so i couldn't get out.  Can't you tell that my section loves me?  Also, miller likes to send people messages from my phone, and on the bus ride back, he had my phone with him!  Mara thought it'd be really funny to text my phone "Lauren found your bra in the cabin.  The lacey one, she said she'll give it to you later" GOOD ONE MARA, GOOD ONE.  And of course miller read it since he doesn't know about this thing we call privacy.  He knew that it was a joke though. Smart kid. 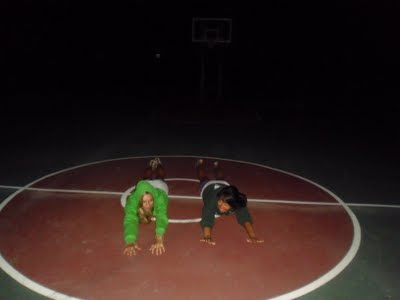 Also last night, me and sarah decided to superman banana on the basketball court literally 5 minutes before we had to be in our cabin.  It's about a 5 minute walk away too.  This old guy watched us while we superman banana'd and he probably thought we were on drugs.  I don't blame him though lol.  (That's the superman pose).


All in all, i thought this year's band camp was fun! Maybe not as intense and rainy as other years, but i really like my section this year.  It's my little dysfunctional family!  They are annoying as hell, but i'm going to miss them :(  We still have all season to go though! So I really shouldn't be thinking sad thoughts like that.  It's well, sad.

So now i'm extremely tired.  Time to catch up on sleep!