Yes, I get it, in a big way.  I've always known that I kind of experience it when I drive, but I didn't realized how bad it was until my dad and I drove to Cambridge on sunday.  Like holy CRAP.  Every few minutes he'd have to tell me to stop drifting, and by the time we were almost at MIT, I was fighting my body to stay awake and focused.  It was kind of awful.  On the brightside, MIT was amazing.  Out of all the colleges I've visited so far, it's probably my favorite since it "fits" me the best.  First thing we saw when we go to the campus was this crazy dorm.  It had a bunch of little windows, so basically your room could have ten windows in it.  How boss is that?  I've decided that's where i'm living...after i get in, obviously. :')
Anyway, we walked into the auditorium for the info session.  As we were all sitting there waiting for it to start, groups of guys wearing bright shirts and ties started chanting and freaking out all around the audience.  Everyone was like WTF ?? Then they proceeded to sprint to the stage and after a minute of shuffling around and getting ready, they started to sing their a cappella version of "Club Can't Handle Me".  Haha they were ammazzinngg.  I decided I liked MIT right away mostly because of them, lol.  Also their name was fantastic: The MIT Logarhythms. Ha. But MitLogs for short.  I got their EP they were selling afterwards :) Actually, i'm listening to it atm while blogging. "Down" by Jay Sean in case you were wondering.  After they finished singing, they promptly ran off the stage and the dean of admissions walked on and droned about facts and figures.  I'll give him props for his dry sense of humor, but I was literally falling asleep.  Embarrassingly enough, I was doing that head-bob thing where you fall asleep but then catch yourself.  The people behind me probably thought I had tourettes.  After the info sesh, we went on a tour of the campus which was really nice.  It wasn't as grand or rustic as harvard/yale/brown had been, but it was so goddamn cool.  My personal favorite was the student center.  It's made up of a bunch of different materials and crazy angles and shapes.  Kind of looked like it was from a Dr. Seuss book. 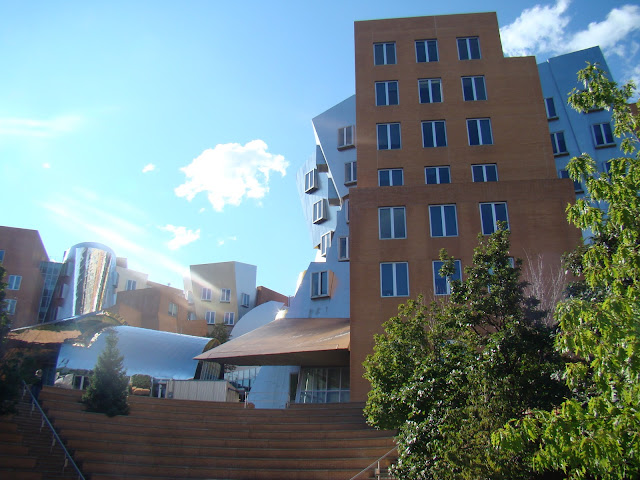 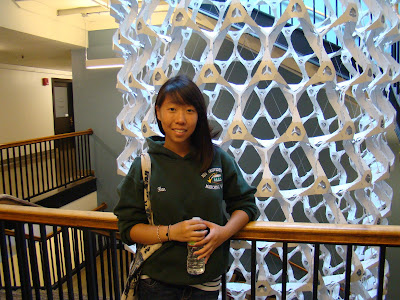 When we went into the architecture building, there was this giant cone-thing made of paper that extended from the first floor all the way to the 5th (it was one of those open sorta-spiral staircases).  I took a picture from the side, and then one from the top looking down.  How boss is that ??  Overall I really liked the architecture building.  There were these cool projects hanging up everywhere and posters of beautiful buildings and their interiors.  One had these giant shiny pillars that would reflect a pattern of lines on the floor.  Hard to explain, but take my word for it, it was amazing.  Also the students i saw working seemed really cool (and good looking, though they might've been gay).  Lol, also a lot of them were asian, but hey what do you expect?  Somewhere I could totally see myself :) 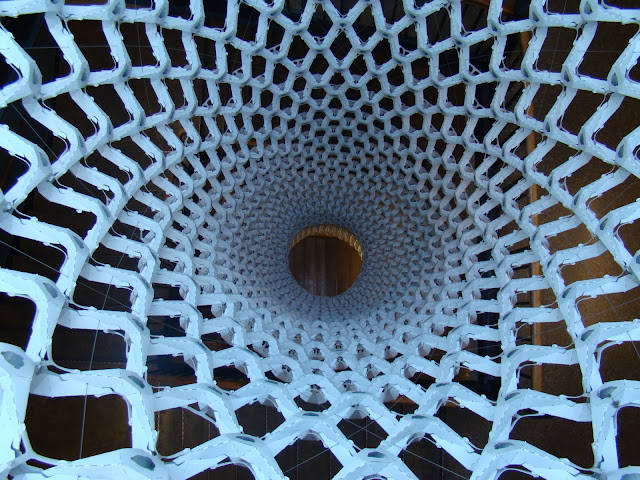 I really want to go sleep now, so i'll end the post here.  Not much else happened except for a delicious chicken caesar salad and a big bag of sour patch watermelons.  Friday night football game tomorrow!  Ah! Night !