Oh debby.  Do you guys remember her from the Amanda Show ?  She's the one from the Girls Room that  really liked eggs.  Eggs are really fantastic, for eating, that is.  I could eat them all day and stock up on cholesterol.  But you know what they suck for? Drawing. My art homework this week is to draw 6-12 eggs on a patterned fabric (see? i wasn't just randomly reminiscing about the amanda show lol).  Anyway, you know what happens next:  ITS 10 AND I'VE BARELY STARTED.  It's expected, don't deny it.  And of course i'm blogging again instead of working on it hahaha.  I don't know why i'm blogging so much recently.  I think it's mostly due to my lack of drive to do anything mandatory or assigned.  Not a good way to start off senior year at all.

Lol, like how i put the stars to signify that time has passed? Anyway, it's now friday and i just got home from school about an hour ago. 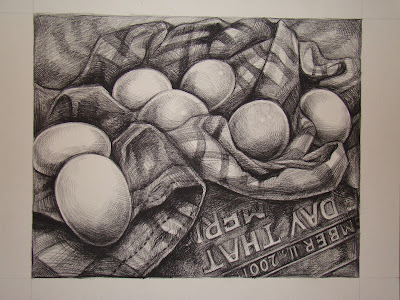 I really enjoy this whole star thing.  Took a three and a half hour nap, and now I feel even more tired lol.  My body has finally experienced sleep and it wants more!  Anyway, here's my final egg drawing.  The picture i took of it is a little obnoxiously crooked, but deal with it all you OCD people.  Personally it's annoying me so much i can't even look at it. Haha I'm such a hypocrite.

On a different note, last night my dad called us while he was in the train coming home from work to tell us that there was a giant rainbow outside.  My mom, sister, and I literally bolted outside holding the camera looking like complete idiots.  The rainbow was barely visible, but I managed to take this cool picture.  Isn't it pretty? :)  The neighbors definitely think we're weirdos. 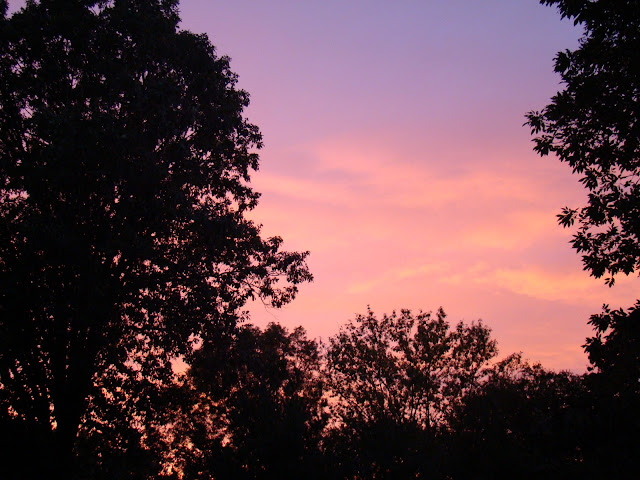 Something that's been really bothering me all day is that I found out this girl in my grade cuts herself.  Who is she?  The girl that i share mutual hate with.  I was browsing her blog last night, and she had posted pictures of her scarred wrist and thigh.  They were mostly healed so i'm guessing she doesn't do it very often, but it's scary to think about, and as much as I don't like her (at all), I'm really worried about her.  Victor thinks it's my own fault for intruding on her personal life and reading her blog.  According to her post, she doesn't want any help and says that she's perfectly fine.  She's not addicted to it, so i guess it's not mega serious, but i feel like something needs to be done.  Apparently she doesn't listen to anyone who tries to talk her out of it, including her boyfriend.  And her first sentence of the post is "If you have a problem with it, fuck off"  So i guess i should be "fucking off" but i'm not sure if i can.  I just can't get it out of my mind!  What drives people to take a knife to their wrist?  Holy crap.  I might post more on this topic later, maybe not.  Depends on what i decide to do.  Mostly likely, I won't mention it for a while, but if it gets more serious, i'll have to rethink that decision.  There isn't an easy solution to this.

On to a happier topic!  Tomorrow is the first home football game!  The band is performing for the first time (without mike since his ankle is still messed up) and i'm excited for stands music!  Technically it's sits music...oh the humor.

Also, I'm happy that ed decided to make a blog! Now we can be bbbfs! (Best Blog Buddies Forever!) I completely just pulled that out of my butt, but the alliteration has a nice ring.  It's made of diamonds.  Ha.  I am butter today, get it? Cuz i'm on a roll.