So incase you don't get it, we won states today!
We were against 3 other bands, it was pretty legit.  I think we won by about .6 of a point.  But we lost percussion by about .2 of a point.  We'll get em next week at northern states though.  Apparently they changed the name to "nationals" but that's pretty pointless because bands from about 3 - 4 states compete in it.  Not very national if you ask me.

So today I woke up ridiculously early for a stupid morning practice that ran 9-12.  Stayed up till about 4 last night making little cartoon index cards (with messages) for my section.  I can't believe it's my last year, and we only have one competition left :(  Today Mr. N was talking about how it was almost over for the seniors, and I legitimately had to hold back tears.  Maybe I will cry at the last set of the last show... just like Itkor. 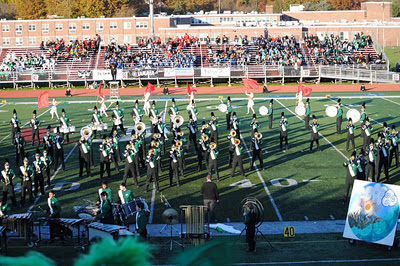 After the competition, I went with Perry, Miller, Markymark, Alex, and Victor to get some dinner.  First we went to Wasabi, then realized we didn't have enough money to afford an actual meal, so we bought rice, ice cream, and soup to not seem too rude.  It was hilarious. Markymark bought a bowl of plain white rice and that was it. lol. Alex and Victor ended up leaving after Wasabi, but the rest of us went next door to Hacienda for some nice mexican food.  We talked about so much random stuff, like Jason Mango's sex life. Lmao. He's 17 and fucking with a 14 year old.  She had an STD scare so they had to break up (cuz the parents were all grrrrr) and then he got a hand job from this girl in the color guard.  Perry was freaking out because he's friends with Mango and the color guard girl and her innocent image pretty much was shattered in his eyes.  It was kind of sad to see because he was actually upset by it.  In other news, Miller told me he loved me.  Before you start freaking out, it was a joke !  But he still said it and then choke/hugged me.  Actually it was a nice hug before I told him I hated him, then it turned into a choke.  Also when I dropped him off at his house, he kind of awkwardly reached for my shoulder and ended up patting it a couple times.  He thanked me for the ride.  I thanked him for the pats.  Hahaha it was an awkward scene, trust me.

So after that, I sped over to dan's house for a little Shalomie jam session.  It was pretty good, I love my band :)  Well, most of the time.  Schendt is kind of a huge ass hole. lol.  He's a racist pig.  That aside, we are probably performing at the local venue in December!  Ahhh!  I'm kind of excited!  (Even though that place is pretty pathetic since the audience is always lame as heck).  Okay now i am going to sleep!  I just wanted to post about tonight before I forgot to.  I'll blog about the power outage tomorrow!
Posted by Sonya at 1:39 AM